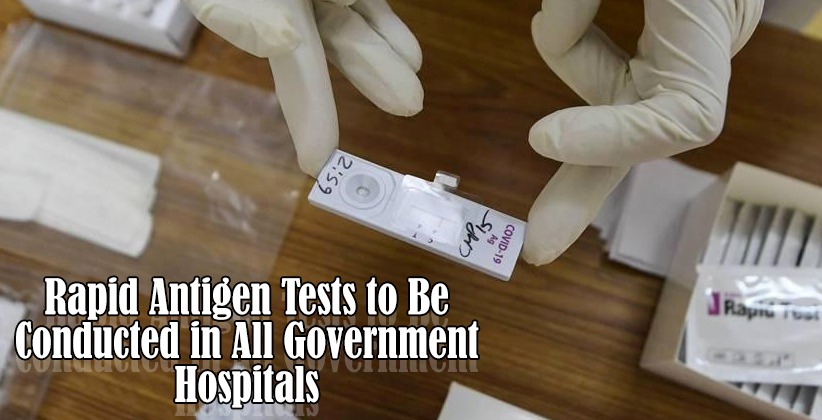 The Delhi government, through an affidavit filed by the Director-General, Health Services, has said that all Delhi Government-run dispensaries and polyclinics will be offering Rapid Antigen Testing (known as RAT) on all working days.

The government will prioritize the testing of Special Surveillance Groups and that ensure its applicability thereafter. The tests will be conducted on working days between 9 a.m. and 12 noon, the affidavit added.

A plea was filed in Delhi High Court seeking to ramp up testing facilities in Delhi for COVID-19. The matter was taken up for consideration by a division bench of Justice Hima Kohli and Justice Subramonium Prasad.

The Order, dated 14 July 2020, states, “The affidavit of the Delhi government filed by the Director-General, Health services states that to augment testing for detecting COVID-19 infection, and to make it more accessible to the general public, all the Delhi Government hospitals have been asked to undertake Point of Care Testing in the form of Rapid Antigen Detection Test (in short, ‘RAT’) of eligible individuals in terms of an order issued on 5.7.2020.”

“Further an order dated 9.7.2020 has been issued to all the private hospitals to ensure that RAT test is conducted in respect of all the eligible individuals,” it added.

Learned ASC Mr. Satyakam, who appeared on behalf of the Delhi Government, submitted that sample collection for sero-surveillance has been concluded by the government, and it is awaiting reports from the National Centre for Disease Control (NCDC), Ministry of Health and Family Welfare, and Government of India.

The Court ordered that the NCDC report “shall be placed on record by tomorrow with an advance copy to learned ASC and remaining counsel.”

Sero-surveillance is the process of collecting and testing samples from concentrated areas to find out whether community transmission has taken place or not.

The Indian Council for Medical Research also filed an affidavit, wherein, it submitted that it has received 450 applications from Delhi based private hospitals and laboratories for seeking authorization to undertake the Rapid Antigen Detecting Test (RAT). Out of this, 150 applications were allowed and 300 applications are pending on ground of incomplete procedural formalities due to be completed by the applicants. “An updated affidavit shall be filed by the ICMR before the next date,” the Court ordered.

Responding to the abovementioned submissions by the Delhi Government and the ICMR, the petitioner Mr. Rakesh Malhotra contended that, “the computed statement filed by the Delhi Government does not reflect as to how many persons who had undergone the RAT tests and turned out to be COVID negative, were made to undergo the RT PCR test.”

“The said figures will correctly reflect the extent of ramping up of tests that Government of NCT claims it has done,” he added. The Court directed the Government of NCT of Delhi to file a brief affidavit to clarify the above position.

In addition to this, it directed the ICMR and the NCDC to file affidavits regarding clearance of pending applications and analysis report of Sero-surveillance sample testing, respectively.