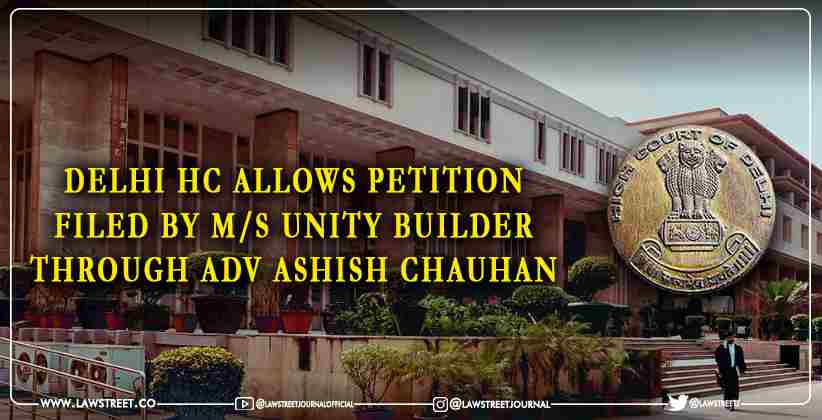 A single bench of the Delhi High Court comprising Justice C. Hari Shankar, while hearing a petition filed by M/S Unity Builder through Advocate Ashish Chauhan under Section 34 of the Arbitration and Conciliation Act, 1996 challenging the order of the sole arbitrator (that dismissed the application of the claimant to alter the amount of the claim), quashed and set aside the said order.

Consequently, the petitioner submitted their statement of claim and revised the claim of 1,12 crore against Claim no. 1 to 1.62 crore upon the perusal of the documents which have been made available by the respondents.

The claimant had filed an application on January 29th, 2020 before an arbitral tribunal to amend the claimed amounts under claim 1 dealing with non- payment of work and payable amounts of bills from 1.12 crores to 1.75 crores.

The application was rejected by the arbitrator by order dated February 21st, 2020 on two grounds:  the finding appears to be incorrect according to the sole arbitrator, as the applicant had actually prayed for ₹ 1.62 crores in the statement of claim and not ₹ 1.75 crores. The enhancement from ₹ 1.62 crores to ₹ 1.75 crores was sought, as already noted hereinabove, by a separate application dated January 29th , 2020, which was certainly relatable to Section 23 of the 1996 Act; and that under Clause 25 of the agreement that stipulate 'the arbitrator shall adjudicate on only such disputes as are referred to him by the appointing authority and give separate award against each dispute and claim referred to him'.

Subsequently, the petitioners moved an application on February 24th, 2020 before the Chief Engineer of the respondent requesting him to amend the amounts claimed against Claim No.1 dealing with the non-payment of work done or due and payable amounts in the R/A bills or in final bills as well as Claim No. 3 dealing with damages as claimed by the claimant in para 8(C) of letter no. UB/AIR/NABL/493 dated 16.12.2017 to be enhanced to 1.75 crores and 1.76 crores respectively, which was met with no action on the part of Chief Enginee. The reason cited was that the matter is  already referred to and before the learned arbitrator.

The Petitioner, thus, moved the Delhi High Court under Section 34 of the Arbitration and Conciliation Act, 1996 challenging the order of the sole arbitrator that dismissed the application of the claimant to alter the amount of the claim.

Taking note of  the various submissions that were advanced by Mr. Chauhan on behalf of the petitioner and Ms. Arora on behalf of the respondents, Justice C. Hari Shankar opined that the issue is limited to the ambit of Clause 25 of the General Conditions of Contract (GCC), governing the petitioner and the respondents read with Section 23(3) of the Arbitration and Conciliation Act, 1996.

He further noted theat the provision merely restricted the jurisdiction of the learned arbitrator with regards of the disputes which were referred to hum for arbitration and cannot be interpreted to curtail the rights of the claimant from seeking alteration in his claims.

The Court, while deeming the impugned order of the sole arbitrator as ex-facie unsustainable and contrary to both Clause 25 of the GCC as well as Section 23(3) of the Arbitration and Conciliation Act, 1996, observed that

“The stipulation, in Clause 25, that the arbitrator would arbitrate only on disputes which are referred to him by the appointing authority, cannot be read as mutually contracting the parties out of Section 23(3) of the 1996 Act. It was not as though the petitioner had requested the arbitrator to arbitrate on a dispute, which was not referred to him for arbitration, but merely sought amendment of the amount claimed against the dispute.”

Further, the court, while delivering the judgement, issued the cautionary that  decision of the court is not to be treated as an expression of opinion regarding the merits of the claims of the petitioners and merely decides that entitlement of the petitioners to amend the amount claimed and allowed the petition seeking to amend the amounts of its claims against Claim Nos. 1 and 3 from  ₹ 1.12 crores to ₹ 1.75 crores and ₹ 75 lacs to ₹ 1.76 crores respectively.