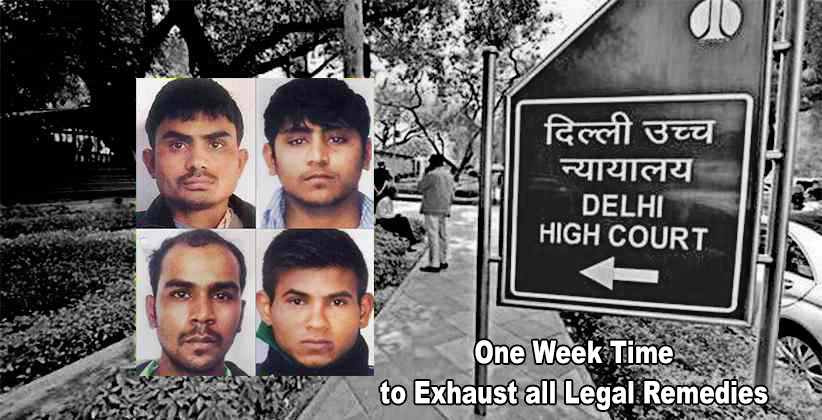 The High Court of Delhi today (February 5, 2020) has given the Nirbhaya rape and murder case convicts one week to exhaust all legal remedies. The High Court refused to set aside the verdict of the trial court granting a stay on the execution of the convicts which was scheduled for February 1, 2020 at 6 am earlier.The High Court had undertaken to pronounce its verdict on hanging of four convicts today at 2.30 pm.  The verdict was on the Central Government’s plea which said that the four convicts in the 2012 Nirbhaya Gangrape case were misusing the judicial system to delay their hanging.

Justice Suresh Kaith has been hearing the matter in order to decide the future of the four convicts; namely Mukesh Kumar Singh (32), Pawan Gupta (25), Vinay Kumar Sharma (26) and Akshay Kumar (31).

The court had, on February 2 reserved its order on the Centre's plea after holding special hearings on Saturday and Sunday (February 1-2, 2020), saying the decision would be passed at the earliest.

The trial court on January 17 had issued black warrants for the second time for the execution of all the four convicts in the case in Tihar jail to be held at 6 am on February 1, 2020. Earlier, on January 7, the court had fixed January 22, 2020 as the hanging date.

On January 31, 2020 the court had again stayed the execution as the counsel for three convicts -- Pawan, Vinay and Akshay -- urged it to adjourn the matter "sine die" saying their legal remedies were yet to be exhausted.

While the mercy pleas of Mukesh and Vinay have been rejected by the President, Pawan has not yet filed it and Akshay's mercy plea which was filed on February 1, 2020 is still pending.