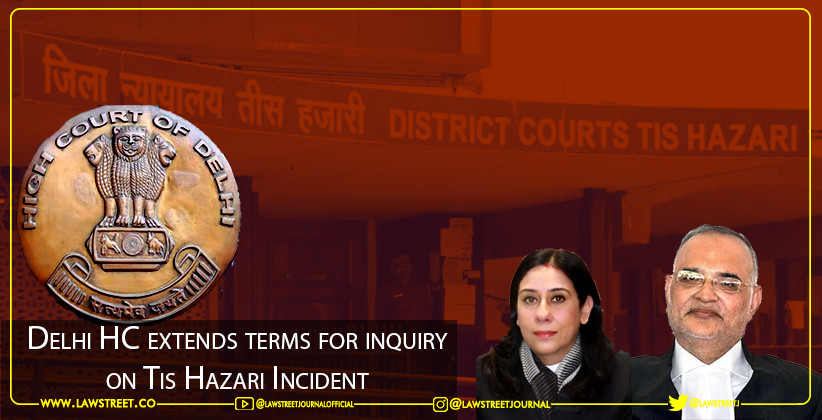 Judiciary Feb 26, 2021 Namya Bose ( Editor: Ekta Joshi ) 4 Shares
4 Shares
The Delhi High Court has recently granted extension to the Inquiry Commission on their terms on the Tis Hazari parking incident that took place in 2019. The terms of Commission to collect all eye-witnesses in the matter has been extended up to December 31 2021 by the Delhi bench of Justice D. N. Patel and Justice Jyoti Singh, considering the coming in of the Covid-19 pandemic and the lockdown period that was prevalent March 2020 onwards.

The Court in 2019 took suo motu action, then constituting a vomssion for conducting inquiries on the same. Justice SP Garg of the Delhi High Court bench was appointed head of the probe and passed detailed orders on the said incident that happened.

As per the update on the inquiries by the Commission, 178 witnesses have been examined as recorded till 17th December 2020 and several more are yet to be questioned. Considering the sudden and unfortunate happening of a world wide pandemic that slowed down the ongoing process, the Court granted extension to the Commission.

This incident of a scuffle between the police and lawyers took place back in November 2019 in the parking area of the Court premises of Tis Hazari Court, Delhi.

The conversation between the two sides started with the police asking a few lawyers to remove their car, soon after which the conversation turned confrontational then quickly escalating to a violent outbreak. Situation intensified, leading to firing leaving more than 4 lawyers injured.

The BCI took cognizance of the incident. Soon after the incident, a press release was made by the Bar Council of India for sentencing to punish the Delhi Police for brutally firing at lawyer in this incident. One of the lawyers, Lalit Sharma told reporters, “Sagar,Me and another friend came out of the Jeep to attend the hearing of our client. Kumar asked us to remove the vehicle and we told him our parking staff will remove it within five minutes. We asked him to take our phone, but he refused to allow us to go” However, yet another police officer at the incident went on to report that,

“The conversation soon turned confrontational, and Sagar tried to beat me up. But he was overpowered by my colleagues, who took him inside the lock-up where our ACP (3rd Battalion) was present. ACP sahab came outside and sorted out the matter, and Sagar left the lock-up.”

No final order has been given by the Court, investigation and examination of eye-witnesses is yet to be fully complete.