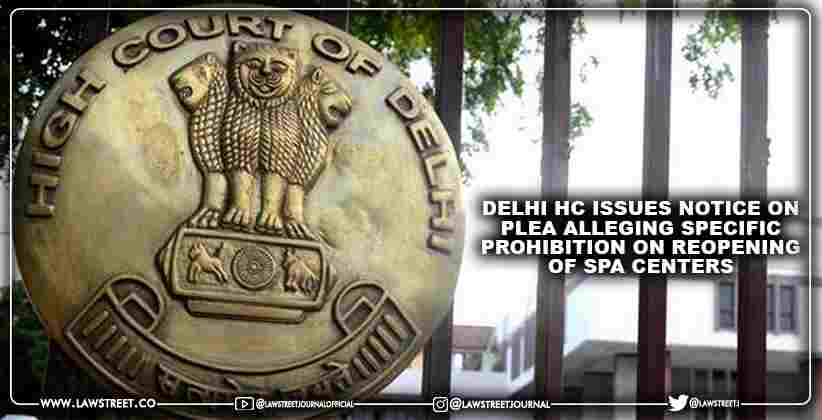 Justice Rekha Palli sought response of the Delhi Government and the Centre in a plea filed by two licensed spa centers located in Delhi and has listed the matter for further hearing on July 20, 2021.

The Delhi High Court on Monday, July 05, 2021, issued a notice on a plea alleging delay by the Government to issue guidelines for opening up spa centers. It is alleged that the spa centers are being discriminated with salons, gyms, and other establishments which have been opened up. In the national capital, spa centers were closed down in wake of the second Covid-19 wave.

The Court in its order stated, “It is expected that the Respondent No. 1 (Delhi Government) before the next date will be ready with instructions as to why in the light of the orders passed by this Court, spas are not allowed to be opened.”

However, the Court clarified that the court cannot direct the government as to what establishments are to be kept opened as it does not have the expertise for doing the same.

Seeking quashing of the guidelines which were issued on June 26, 2021, allowing opening of salons, gyms and other such establishments, the plea also seeks reopening of spa centers in view of the earlier passed order of the High Court that said salons and spa centers are on equal footing.

Advocate Davesh Vashishtha, who appeared for the petitioners, argued that the Delhi Government had permitted all salons and ayurvedic centers, gyms in Delhi to be opened by passing different orders, but, in case of spas, they have not done so.

The Court on hearing this, orally remarked, “we are not living in ivory towers. We are aware of the situation. I was also a part of the division bench dealing with the Covid petitions. Hotels have been opened in some other states. I'm not dismissing the petition. Let them file a reply.”