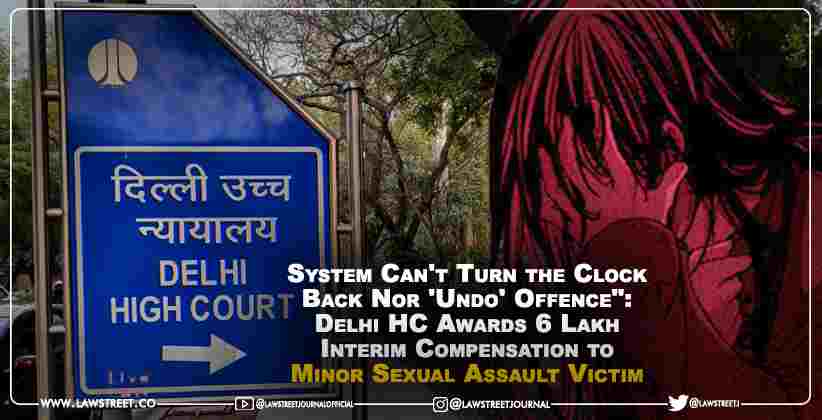 When awarding a minor survivor of sexual harassment  ₹6 lakh in interim compensation on Thursday (May 13, 2021), the Delhi High Court made a significant observation, saying, "Since the system cannot turn the clock back nor 'undo' the offence, there is little else the court can do other than prosecute the offender and provide to the victim whatever psychological security and sense of the empowerment that monetary compensation can give."

Importantly, the Court noted that, even at this early point, when seeking to calculate the compensation payable to the petitioner, " The effort of this court should be to offer monetary recompense, to the extent possible, for the atonement of the crime to which the petitioner was subject; the physical and mental trauma suffered by him; and the emotional scar left on his psyche."

The petitioner, a boy of about six years old who was reportedly subjected to sexual assault and sodomy by a relative, filed the instant petition via his mother, challenging the Additional Sessions Judge (ASJ) (POCSO), Saket Courts, New Delhi, order dated (August 19, 2020). The petitioner, who was the victim of the crime, was paid interim compensation of Rs. 50,000 by the Sessions Court; however, the investigation of the accused was still ongoing, and the trial is still ongoing.

The petitioner's counsel challenged the decision, claiming that the court refused to recognise that, even at this early point, restitution needed to be provided to a minor who had been the target of sexual assault.

" It was to enable the victim and his family to overcome the incident and to compensate for the damaging effect on the victim's psyche and to help rehabilitate the victim into society, for 'relief' and 'rehabilitation', and not merely to cover for the expenses to be incurred, for the time being”, submitted the Counsel.

It was also claimed that, using the Delhi Victim Compensation Scheme 2018 ('DVC Scheme 2018' for short), interim compensation should have ranged between Rs. 6 lacs and Rs. 10.50 lacs.

The Court noted at the outset that section 33(8) of the POCSO Act allows for payment of compensation to the victim in a case involving crime against a minor, regardless of gender. In the case of the State of Delhi, the Court stated that if a claimant seeks compensation through the DLSA or DSLSA, the responsible body must determine and pay compensation in compliance with the DVC Scheme 2018.

However, the Court added:

"If a victim applies for compensation under section 33(8) before the special POCSO court, the DVC Scheme 2018 is not binding but serves merely as a 'guideline' for the court to assess and pay compensation, whether at the interim or final stage."

Furthermore, the Court stated that Rule 9 of the POCSO Rules 2020 allowed a court to grant temporary relief in appropriate circumstances, either on its own or on the basis of an appeal submitted by a victim.

In light of this, the Court stated that a direction to pay a certain sum as compensation must clearly be binding, leaving the legal service authority with no choice. Furthermore, the Court noted that the accused is the petitioner's uncle, who is supposed to have subjected the petitioner to the aforementioned offences, and that, apart from having undergone the cruel, physical offences in what should have been the ‘safety of his own home, it is not only probable but definite that the petitioner was subjected to the aforementioned offences.

"While attempting to quantify the compensation payable to the petitioner even at the interim stage, the effort of this court should be to offer monetary recompense, to the extent possible, for the atonement of the crime to which the petitioner was subject; the physical and mental trauma suffered by him; and the emotional scar left on his psyche."

" The petitioner's mother would need to spend more time with him to give the petitioner emotional security since he was assaulted by a relative in his own home; by reason of which she may not be able to go to work," added the Court.

In light of the above, the Court ordered that the Delhi State Legal Services Authority disburse and pay interim fee to the complainant in the sum of Rs. 6,00,000/- within four weeks.

The Court also stated that it was appropriate to place money in the petitioner's family's hands, to make arrangements for the petitioner to comfortably attend his previous school or another school, and to meet his educational needs.