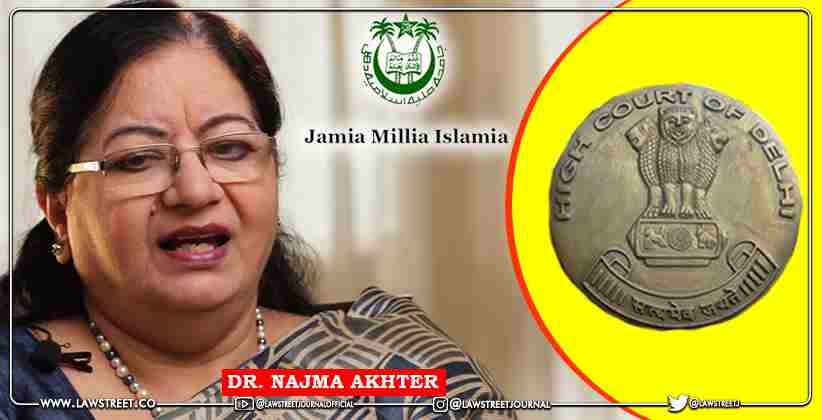 A division bench of Justice Rajiv Shakdher and Justice Talwant Singh was hearing an appeal against a single-judge bench order dated 5th March 2021, which had rejected a writ petition challenging her appointment, stating that the Court cannot sit in appeal over the Search Committee's decision.

The Court requested responses from the Centre, Najma Akhtar, the Central Vigilance Commission, the University Grants Commission, and Jamia Millia Islamia, and scheduled a hearing for September 22,2021.

The appeal, filed by M.Ehtesham -ul-haque an alumnus of Jamia Millia Islamia University's Faculty of Law, claims that the single judge failed to recognise the Search Committee's process and that it appears to have "delegated critical and fundamental aspect of gauging the'suitability' and 'eligibility' of a candidate vis-a-vis Vigilance Clearance available with the said candidate."

During the hearing, Advocate Mobashshir Sarwar, who was representing the appellant, raised the issue of the composition of the Search-cum-Selection Committee.

According to him, the Committee had to be composed of people of eminence in the field of higher education, and Justice (Retd.) M.S.A. Siddiqui did not meet the requirements of the University Grants Commission's Regulations enacted in 2018.

"Because the learned Single Judge failed to recognise, in contrast to Justice (Retd.) MSA Siddiqui, that an academic question should be left to be decided by academicians and educationists, who are better equipped to do so due to their expertise and experience, which Judges do not have," the plea reads.

"In this case, the ostensible Committee appears to have inexplicably delegated this function to MHRD.Not only is such a delegation legally unsustainable in the sense that a body that has already been delegated certain powers, as in the case of the Search Committee, cannot further sub-delegate any aspect of such powers to another entity, as is exemplified by the delegation of the aspect of suitability/eligibility in terms of the Vigilance Clearance to the Ministry of Education, erstwhile MHRD," The plea reads.

The appellant also claimed that the adverse vigilance report submitted by the CVC regarding Dr. Najma Akhtar was not considered by the Search-cum-Selection Committee.

ASG Vikramjeet Banerjee, appearing on behalf of the Centre and JMI, argued that Justice (Retd.) Siddiqui was qualified to serve on the Selection Committee due to his previous experience as Chairperson of the National Commission for Minority Educational Institutions.

It was also argued that the Committee is not required to provide reasons for recommending a panel of suitable names, and that the recommendation would suffice.

The single judge observed that the petitioner was unable to demonstrate that any express provision of either the UGC Regulations or the JMI Act had been violated in appointing Dr. Nazma Akhtar as Vice-Chancellor of JMI.

"Rather, the scope is limited to judicial review of the decision, with the Court only concerned with whether the incumbent possessed the qualifications for the appointment and how the appointment was made, or whether the procedure used was fair, just, and reasonable",  the single judge bench remarked.

The appointment was found to be justified, so the challenge was rejected.

The case has been rescheduled for September 22,2021.