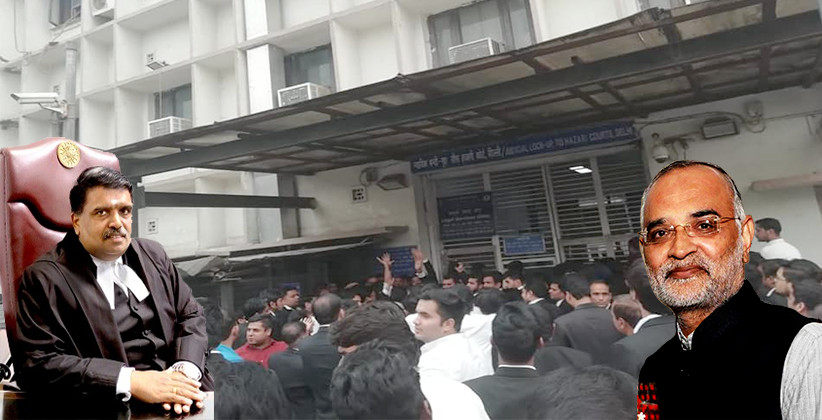 The Delhi High Court on Sunday (November 3, 2019) ordered a judicial enquiry into the clash between police and lawyers which took place in Tis Hazari court premises on November 2, 2019.

In the special sitting, the court said Justice Garg will be assisted by Director CBI and the inquiry shall be completed within six weeks and a report be submitted in the court.

The court directed the Delhi Police Commissioner to record the statements of all injured advocates and to immediately lodge the FIR, the copies of it shall be presented before the court.

No coercive action against any lawyer

During the hearing, the Bench directed that no coercive action would be taken against any lawyer on the basis of FIRs lodged at the behest of police officials.

The Bench directed the Delhi Police Commissioner to transfer Special Commissioner Sanjay Singh, who had allegedly ordered lathi charge on lawyers inside the court complex, and Additional DCP Harinder Singh, who allegedly had ordered firing at the lawyers.

It also directed the Police Commissioner to take immediate action with regard to suspension of Assistant Sub Inspector (ASI) Kanta Prasad, who allegedly dragged an advocate inside the lock up and beat him up, and ASI Pawan, who allegedly fired at the lawyers.

Directions were also issued to the Delhi government and the Centre to provide best treatment to injured lawyers, including those who received gun shot injuries, preferably in AIIMS.

The court also directed the Delhi government to provide lump sum ex-gratia to advocates Vijay Verma, Ranjit Malik and Pankaj Dubey, who received gun shot injuries, of Rs 50,000, 25,000 and 10,000 respectively. Compensation over and above this amount has to be paid later, based on future needs.

The directions were issued by the court after hearing the heads of various lawyers bodies, including Bar Council of India (BCI) which in an application moved before the court has asked to issue the following directions:

BCI submitted before the court that the Delhi police cannot be expected to conduct a fair and impartial investigation into the scuffle that had taken place between police officials and lawyers at Delhi's Tis Hazari Court, reportedly over a parking dispute within the court premises.

Taking suo moto cognizance, the Bench at 1 PM on Sunday (November 3, 2019) issued notice to the Centre, Government of NCT of Delhi, Delhi police and District Bar Associations and listed the matter for hearing at 3 PM.

During the hearing commenced at 3 PM, Advocate Rahul Mehra, representing the Delhi Police, told the court that 4 FIRs have been registered with respect to the incident in which 21 police personnel and eight lawyers were injured while 14 motorcycles and 1 police gypsy were burnt and eight prison vans were vandalised.

During the hearing, Mehra also told the Bench that the probe has been transferred to crime branch and a special investigation team (SIT) has been formed to look into the clash.

One ASI who was accused of taking the lawyer to the lockup has been suspended and Officers Harinder Singh, and Sanjay Singh who ordered the firing of guns and lathi charge have been transferred pending enquiry, Mehra further told the court.