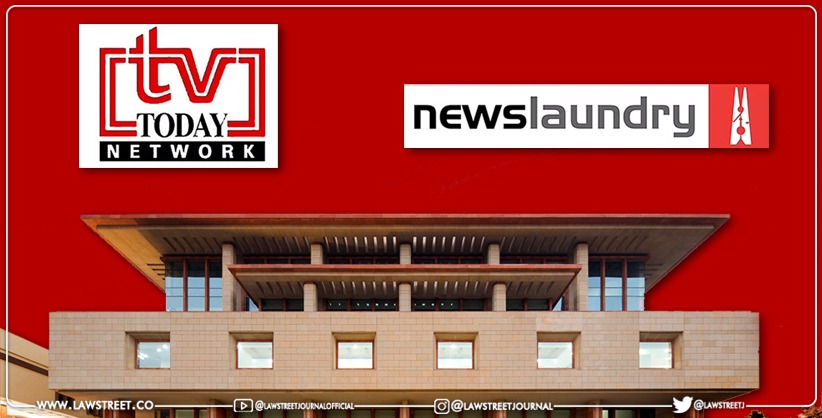 In the suit filed last year, TV Today Network had sought damages of Rs 2 crore (Rs 2,00,00,100) from them for “commercially disparaging” its commercial products and for “defaming” it, its news anchors, management and employees.

Justice Menon held though there may be a prima facie case in favour of the plaintiff, the circumstances are such that no interim injunction can be granted against Newslaundry as there was no balance of convenience in favour of TV Today and no irreparable loss was being caused.

The court further said that the matte should be treated as a commercial dispute and discussed under the broadcast rights rather than copyright. The TV Today Network (TVTN) which owns news outlets like Aaj Tak and India Today channels as well as magazine had approached the Delhi High Court against Newslaundry and its founder-directors alleging defamation, commercial disparagement and copyright infringement.

As per the suit, Newslaundry uploaded various videos on its website and social media platforms wherein it “has infringed” on TV Today Network’s copyrights, “made untrue, unfair, disparaging as well as maliciously defamatory remarks” about the news, reporting and news anchors of the news channels operated by it as well as management of the media group.
“Satirists, at all times in our culture, have been greatly respected and there are several art forms in this country that allowed such criticism of even the rulers in the heydays of monarchy and which art forms still exist. Examples, that come to mind are ‘Ottamthullal’ and the ‘Chakiyaarkoothu’, both in Kerala. Sharp use of language conveys the message intended by the artists, but in a cultured and nuanced manner. Such creative genre must, without doubt, be encouraged and protected,” Justice Menon said.

Since the defendants No.1 to 9 (Newslaundry) claim their programme is satire, they need to explain which one of their programmes is ‘satire’, what portion is ‘comment’ and what justified ‘criticism’. But whether the comment is satirical or malicious would have to be established as a fact and therefore, would require trial and a presumption (which) either way cannot be drawn at this stage,” the high court said.
“This court cannot accept this self-appointment by the defendants No.1 to 9 (Newslaundry) as a ‘Regulator’ of the content of the media, for the reason that mechanisms exist for redressal of grievances relating to content of news channels and for social-media content, set-up statutorily, including by the platforms themselves. It is obvious that there can be no ‘free for all’ in the regulatory sphere,” it added.