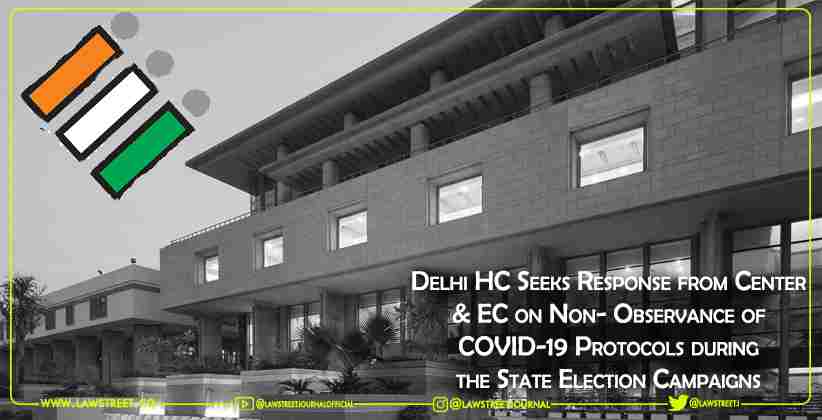 On a plea that was filed with regard to non-observance of COVID-19 protocols during the ongoing election campaigning, Delhi High Court asked for a response from the Center as well as the Election Commission.

Dr Vikram Singh, who is the former Director-General (Police) of Uttar Pradesh preferred the application that reads, "..the biggest casualty during COVID-19 has been the rule of law itself, as strict action is being taken against commoners, but there is barely any action against politicians.”

This application is a part of Singh’s petition which further seeks debarment of candidates and campaigners permanently or for a sufficiently long period who have repeatedly been violating the compulsory COVID-19 protocols that were issued by the election regulator.

Singh has also requested the issuance of directions to the relevant authorities to ensure that COVID-19 containment protocols during elections are strictly followed.

The application was taken note of by a Division Bench comprising of Chief Justice DN Patel along with Justice Jasmeet Singh. They additionally listed it for hearing along with the main petition on April 30, 2021.

It was filed through Advocate Gaurav Pathak. It highlights the fact that over 40 roadshows and rallies had been organized by major political parties and around the time being, just before the end of the first phase of campaigning in Assam and West Bengal, and then 59,117 fresh cases of COVID-19 were recorded in India, the highest in the last 159 days.

Advocate Virag Gupta who  appeared for Singh contended, "When all the authorities are unanimous on mandatory masking, it defies logic as to why the rule should not be enforced in election campaigns."