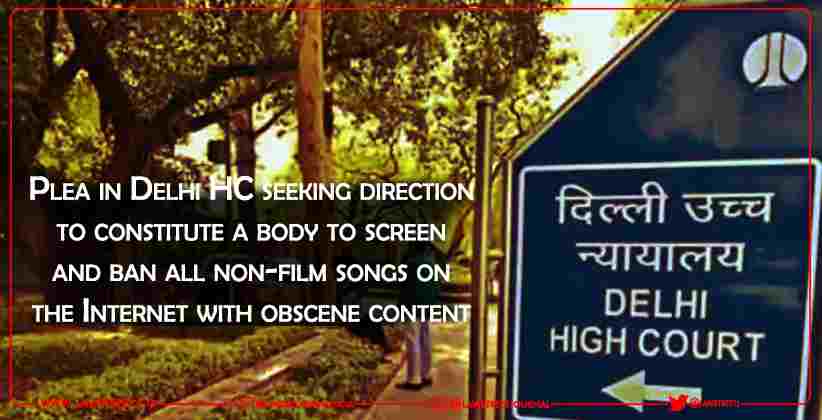 Judiciary Apr 10, 2021 Snehal Khemka ( Editor: Ekta Joshi ) 1 Shares
1 Share
A petition has been filed in the Delhi High Court seeking direction to constitute a body to screen and ban all non-film songs available on the internet containing obscene/vulgar content with immediate effect.


The petition also seeks direction to constitute a regulatory authority/censor board to censor/review the non-film songs, their lyrics and videos which are made available to the general public through various media platforms like Television, YouTube, as well as platforms such as YouTube, Spotify, Gaana.com, Instagram, etc for public listening and viewing and further make it mandatory for composers of non-film songs to receive certification before such songs are made available in the public domain.  The division bench comprising of Justice DN Patel & Justice Jasmeet Singh on Wednesday, April 7, 2021, issued notice to the Union Ministry of Information & Broadcasting & Ministry of Electronics & Information Technology & slated the matter for further hearing on Monday, May 17, 2021.

The petitioners - practising lawyers Neha Kapoor & Mohit Bhadu -- contended that if such content is not regulated, the same would tantamount to a regressive approach when our country, which is much orthodox and patriarchal is still striving towards gender equality by not objectifying women and providing them a safe and sound environment to live.

Additionally, it was said that such non-film songs appear to take the form of instigating people to misbehave with women, objectifying them & promoting drug/alcohol abuse apart from other crimes which are much evident from their lyrics. Furthermore, this will have a much larger impact on society at large, especially the youth, as they are both most exposed and vulnerable to the same.