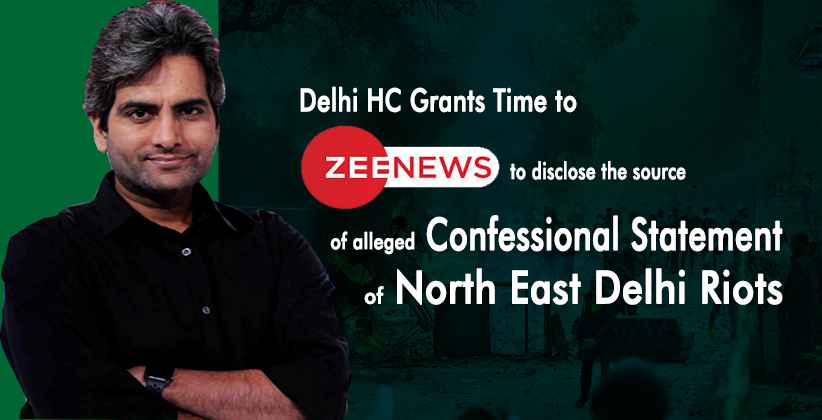 In the case, Asif Iqbal Tanha v. State & others the Delhi High Court on October 19, 2020, rejected Zee News’ request to submit in a sealed cover the name of the journalist who had procured the alleged confessional statement of a Delhi riot accused.

Asif Iqbal Tanha 24-year-old student of Jamia Millia Islamia was arrested by Delhi police on May 19, 2020, in connection with the violence in North East Delhi in February 2020 under the Unlawful Activities (Prevention) Act, 1967.

The officials had said that Asif Iqbal Tanha is a close associate of Umar Khalid, Sharjeel Imam, Meeran Haider, and Safoora [Zargar] who had been the key members of Anti-Citizenship Amendment Act protests and riots in Delhi.

After the arrest, there have been various news reports including reports made by zee news claimed that Asif Iqbal Tanha has confessed to organizing and inciting communal riots that occurred in North-East Delhi in February 2020.

Aggrieved by such news reports Asif Iqbal Tanha filed a petition in Delhi High Court for seeking a direction against media channels to take down this information.

He alleges that this information was allegedly leaked by Delhi police to media channels and it was done to prejudice his right to a fair trial.

The DCP of the Special Cell New Delhi said before the Court that none of the police personnel leaked out any such details of the investigation to the media channels.

It was also submitted before the Court that the petitioner was coerced by the police officials to sign certain papers and make statements while in the custody.

It was further contended before the court that the alleged confession of organizing and inciting communal riots disclosure was not given voluntarily, and are inadmissible as evidence.

Delhi High Court gave an opportunity to Zee News to disclose the source from which the alleged confessional statement of North East Delhi riots given by petitioner was retrieved.

Advocate Vijay Aggarwal counsel for Zee News argued that the journalist was protected against disclosing the source of information .and includes the constitutional right of a journalist.

The Court stated that Article 19(1)(a) of the Constitution of India did not give one an absolute right to publish documents that were yet to become part of public record.

Justice Vibhu Bakhru denied the request of Zee News for submitting in a sealed cover the name of the journalist and directed Zee News to comply with the order seeking an affidavit disclosing the source of the information.