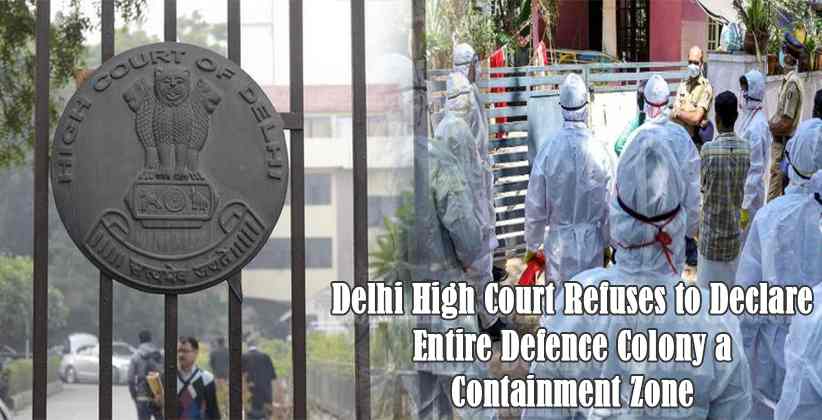 Delhi is the region with the third-highest number of cases of coronavirus in India. With more than 41,000 cases, the entire area has seen one of the worst rates of transmission of the infection.

Overall, the number of containment zones in the national capital increased from 100 to 242 in recent weeks.

In line with this, the High court ruled on a petition seeking to declare the entire defense colony as a containment zone seeking enforcement of a strict cluster containment zone. The petition highlighted how the Defence Colony had not been declared a containment zone by the Delhi Government, thereby not following the guidelines issued by the central government on 16th May 2020. It also highlighted the need to increase the number of beds available for patients given the increasing rate of admission in hospitals for COVID-19 infection.

In return, the Delhi government, in its submission, pointed out that as per center’s guidelines, if in a colony, in a small number of houses, there is a concentration of patients, the whole colony need not be declared as a containment zone. As per the guidelines, the specific lanes of houses with a concentrated number of patients had been declared as a containment zone following the rules.

The court ruled that the entire Defence Colony need not be declared a containment zone. The order has been passed by a bench comprising of Chief Justice DN Patel and Justice Prateek Jalan. It also pointed out how the petitioner failed to point out more regions within the colony with several infections to impose the aforesaid cluster containment in the whole colony. The court ordered-

The Court noted that according to the Central Government's guidelines, the geographical delineation of the containment zone was left to the district authorities/ urban local bodies, based on certain criteria. It clarified that if more regions arise with infections in the colony, the region should be declared as a containment zone in accordance with the law with the advice of experts.

The Court was also informed that pursuant to the order of the Lieutenant Governor, Chairman of State Disaster Management Authority, the availability of beds was also being displayed on the electronic Board of every hospital in the city.

The Court also instructed the Authorities to keep in mind the suggestion by Petitioner's Counsel to utilize the 'ready to move in' Government flats in the city for putting infrastructure like beds, etc. for COVID-19 patients.

With the union taking matters in its own hands, several measures have been introduced to combat the pandemic. From increasing the no. of beds available to patients by means of converted rail coaches, to increase in testing and contact mapping, the administration has increased its efforts to contain the virus as much as possible.