Judiciary Nov 05, 2019 Editor : Shreya Bansal 10 Shares
10 Shares
The Supreme Court on November 4, 2019, in the case of M.C. Mehta v. Union of India & Ors., has sought a report from the Government of NCT of Delhi explaining the rationale behind bringing in the odd-even scheme in the capital region as a means to deal with air pollution.

A Division Bench comprising of Justices Arun Mishra and Deepak Gupta was hearing a batch of petitions when Senior Advocate Sanjiv Sen pointed out that no useful purpose is being served by the scheme as in Delhi more use of two wheelers and three wheelers has taken place and they are being plied more causing equal pollution. He said that it would be appropriate to stop the use of diesel vehicle, in case it is necessitated as the diesel vehicles cause more pollution as compared to petrol and CNG vehicles.

Taking note of this, the court ordered: "Let the Government of NCT of Delhi explain this aspect and file the data in this regard in the Court on the basis of the previous experience and whether if three wheelers and taxies are plying more on road during such restriction and relevant data be placed" The Court further observed in the order: "During Odd/Even Scheme what is the difference being caused by stopping use of four wheelers when various other contributory factors are not taken care of by Government of NCT of Delhi". Direction to stop construction and demolition activities The court referred to an affidavit submitted by the Union Ministry of Environment and Forests which mentioned open dumping of garbage, unpaved roads, road dust, garbage burning and traffic congestion as major sources of pollution.  Taking into consideration the said affidavit, the court ordered: “We direct that construction, demolition and activities be stopped forthwith as well as garbage burning. In case, any person is found in construction and demolition activity and garbage burning in Delhi and NCR region, he/she shall be penalized. Any person is doing construction and demolition activity in violation of this order, shall be penalized with Rs.1 Lac for such activity. For garbage burning he/she shall be penalized with Rs.5,000/- and besides liable for violation of the order passed by this Court to be dealt with in accordance with law.” With respect to open dumping of waste and garbage, the court directed the Government of NCT of Delhi as well as the concerned Municipal Corporation to chalk out immediate plan and to ensure that waste and garbage to be removed to safe places forthwith and also to ensure that no open dumping takes place. For taking care of the road dust, the court ordered to use water sprinklers/dust suppressors on the roads. The issue was taken up in the court after the Environment Pollution (Prevention and Control) Authority (EPCA) declared a public health emergency in Delhi-NCR due to severe deterioration of air quality.  In a letter to the states of Uttar Pradesh, Haryana and Delhi, the EPCA told to the state governments to cease construction activities in Delhi, Faridabad, Noida, Gurugram and adjoining areas and to shut down hot mix plants and coal-based industries. A complete ban on bursting of firecrackers has also been announced by the authority till the end of the winter season. [Read Order]

Judiciary Oct 17, 2019 Lawstreet News Network 2975 Shares
2,975 Shares
The Supreme Court on October 16, 2019, in the case of Prahlad Pradhan & Ors. v.  Sonu Kumhar & Ors., has held that the entries in the revenue records do not confer title to a property, nor do they have any presumptive value on the title.The Division Bench comprising of Justice Indu Malhotra and Justice Krishna Murari noted that such entries only enable the person in whose favour mutation is recorded, to pay the land revenue in respect of the land in question.The court was hearing a...
Read full post 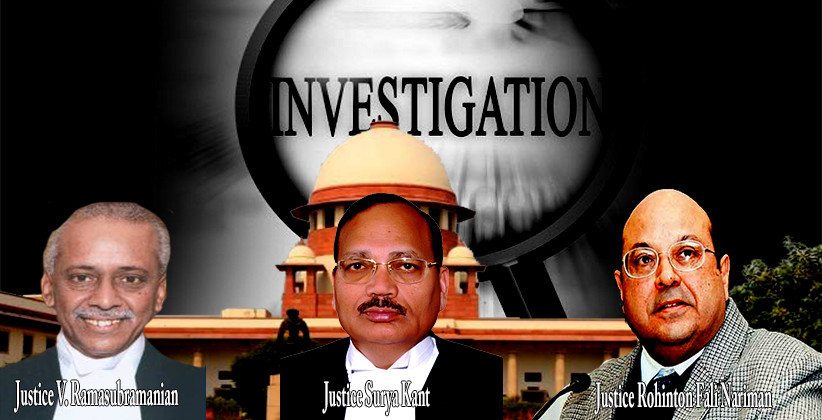 Judiciary Oct 17, 2019 Lawstreet News Network 72 Shares
72 Shares
In a significant judgment on October 16, 2019, the Supreme Court, in the case of Vinubhai Haribhai Malaviya and Ors. v. The State of Gujarat and Anr., has held that a Magistrate has power to order further investigation into an offence under Section 156 (3) of the Code of Criminal Procedure, 1973, in post cognizance stage, until the trial commences.The Bench comprising Justice Rohinton Fali Nariman, Justice Surya Kant and Justice V. Ramasubramanian passing the ruling has set aside a Gujarat High...
Read full post