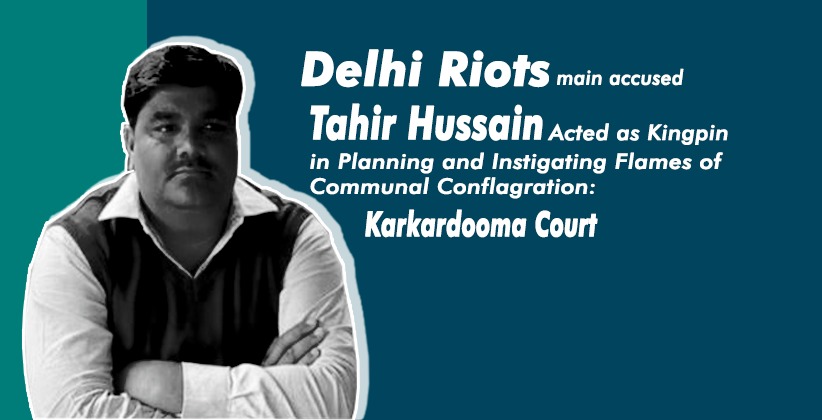 Former AAP counselor Tahir Hussain has been denied bail by the Karkardooma Court of Delhi on 22nd October 2020. Tahir was the main accused in the Northeast Delhi riots which took place in February 2020. It has been stated by the Delhi police that the accused has been booked under the charges of rioting, murder, and inciting riots by spreading communal hate. It has also been noted that Tahir has been involved in creating a conspiracy to instigate the riots and funding to such. Additional Sessions Judge Vinod Yadav of Karkardooma Court of Delhi found Tahir’s involvement in the riots as illegal and unacceptable and dismissed his bail by considering the suspicious act done by him.

Defending him, Tahir’s counsel made his submission noting that on February 24, 2020, around 1:30 pm a mob has gathered outside his applicant’s house and also set fire a bullet motorcycle parked outside his house. The mob further broke the main gate of the house, entered into the house as well as climbed up the roof, and damaged the house completely. It was being argued by the counsel that the defendant has made several phone calls to SHO, PS of Dayalpur, and ACP of the area for the safety purpose of his and his family members’ lives from the riotous mob, got no help as none of the officials responded to his calls.

The counsel further argues that there has been a delay in registering the FIR as the incident took place on the 24th of February but the FIR was registered on 28th February. The counsel went on arguing saying that as his applicant a member of the Aam Aadmi Party (AAP), it was a clear case of political blame game to malign the image of the defendant. The investigation agency has been trying to frame Tahir to gain political leverage by creating wrong circumstances and political warfare to harass his defendant, the counsel noted. The counsel requested before the court that the bail being sought by Tahir on the grounds as there was no adequate evidence stating his involvement in the alleged said matter. No single video or CCTV footage is there to show the involvement of the accused’s in the riots or to cause any damage to the properties by such, the counsel emphasized further.

Special prosecutor Manoj Chaudhary counter the arguments of the defense counsel and noted in his statement that the riots were made with a large conspiracy all over Delhi in February after the enactment of the Citizenship Amendment Act, 2019 (CAA) and lead to a violent protest state-wide. He further argued that the accused has been involved in the riots and had criminal conspiracy in instigating such violent acts. The accused however framed the attacks on his house and sole purposefully provided swords, lathis, knives, firearms, acid bottles, etc. to the riotous mob from his roof himself, as one of the eyewitnesses from the crime scene on the day of the incident, identified the accused in such heinous act.

While the court observed the facts presented by both the parties, the court concluded that though there is no video or CCTV footage suggesting the presence of the accused in the mob during the time of incidence, there is enough ocular evidence available on record which suffices the conspiracy of the involvement of the accused in the act. The court also found that as the accusations made against Tahir is grave in nature as there was no direct involvement in the riots but the accused is somehow liable under Section 149 of IPC as his house was the center or hub of the rioters who did spread violence in all over Delhi and the accused can have a helping hand towards the rioters for committing such crime.

By denying the bail application, significantly the court said,

"In my considered opinion, the statements of witnesses can be said to be delayed when the witnesses are known to the police and yet the police do not record their statements; whereas, in the case of rioting, the police hardly have any idea as to who were the witnesses. Further, people normally do not come forward and it is admitted position on record that on the date of the incident nearly 10,000 PCR calls were recorded in the area of PS Dayalpur. Thereafter, on the basis of these calls, police reverted back and traced out some of the witnesses."