'No Elaborate Reasons Required to Be Recorded by the Disciplinary Authority While Imposing Punishment': Supreme Court 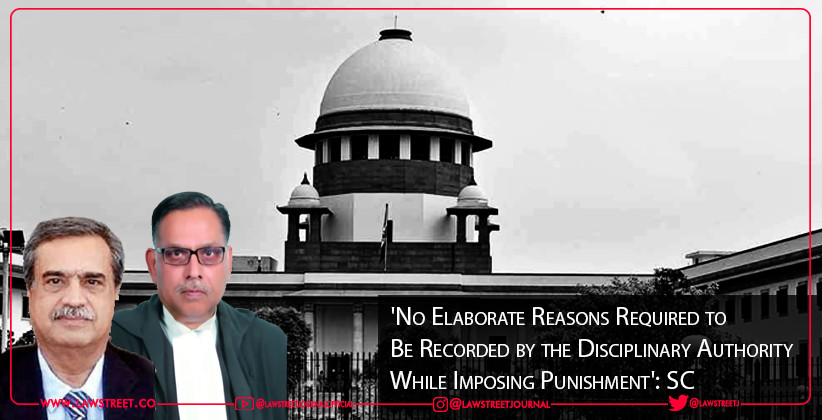 In a recent decision dated 8th February, 2021, the Apex court of the country held that it is not mandatory for the Disciplinary Authorityto record detailed reasons while imposing punishment in accordance with the investigations done by the Enquiry officer.

In this particular case, an investigation was done and a report was made that found out that the manager of Lakhimi Gaolia Bank was guilty of sanctioning and dispersing loans without following the due procedure prescribed under law. He was also found guilty of misappropriation and disbursing loans irregularly in some cases to (1) units without any shop/business ; (2) more than one loan members from the same family etc. The report was accepted by the Disciplinary Authority and a punishment of ‘compulsory retirement’ was imposed on the manager.

A bench comprising Justices Ashok Bhusan, R. Reddy and M.R Shah observed that issuance of a show cause notice by the Disciplinary Authority proposing a punishment for a wrongwould not amount to a decision by the Authority.

The Appellant argued that no reasons were recorded by the Disciplinary Authority dated 29.08.2005 while imposing the punishment of ‘compulsory retirement’ . The Apex Court made it clear that “if the disciplinary authority accepts the findings recorded by the Enquiry Officer and passes and order , no detailed reasons are  required to be recorded in the order imposing punishment”.

As long as the reasons are recorded in the enquiry report, it is not mandatory for the disciplinary authority to give reasons while imposing punishment as well.

Thus, the Court held that due procedure was followed by the disciplinary authority in the present case.

The Appellant also contended that the punishment of compulsory retirement imposed by the authority is disproportionate to the charges levelled against him. The Court while rejecting  this contention as well  observed that:

“The manager of a bank plays a vital role in managing the affairs of  the bank. A bank officer/employee deals with the public money. The nature of his work demands vigilance with the inbuilt requirement to act carefully. If an officer/employee of the bank is allowed to act beyond his authority, the discipline of the bank will disappear. When the procedural guidelines are issued for grant of loans, officers/employees are required to follow the same meticulously and any deviation will lead to erosion of public trust on the banks. If the manager of a bank indulges in such misconduct, which is evident from the charge memo dated 18.06.2004 and the findings of the enquiry officer, it indicates that such charges are grave and serious. Inspite of proved misconduct on such serious charges, disciplinary authority itself was liberal in imposing the punishment of compulsory retirement. In that view of the matter, it cannot be said that the punishment imposed in the disciplinary proceedings on the appellant, is disproportionate to the gravity of charges.”

Moreover, the appellant had virtually accepted the charges that were levelled against him with the excuse that such errors had taken place due to work pressure in reply to the show cause notice issued against him.

Thus, the Court rejected the appeal and upheld the order of punishment by the disciplinary authority.

Judiciary Aug 03, 2021 Nargis Bano ( Editor: Ekta Joshi ) 0 Shares
0 Shares
A two-judge bench of the Supreme Court replicated the practise of the United States Supreme Court by directing lawyers appearing in a case to limit oral arguments to 30 minutes and legal submissions to three pages.Inquiring as to which country in the world would allow lawyers to argue a case for hours and days on end, the bench of Justices Sanjay Kishan Kaul and R Subhash Reddy stated that the time has come for lawyers to change their habits.“We would like to know which court in the world...
Read full post