Home Judiciary "You Have Our Sympathy, But We Can't Take it on Ourselves to Collect and Distribute Money": SC on Victims of Ponzi Scheme
Judiciary

"You Have Our Sympathy, But We Can't Take it on Ourselves to Collect and Distribute Money": SC on Victims of Ponzi Scheme 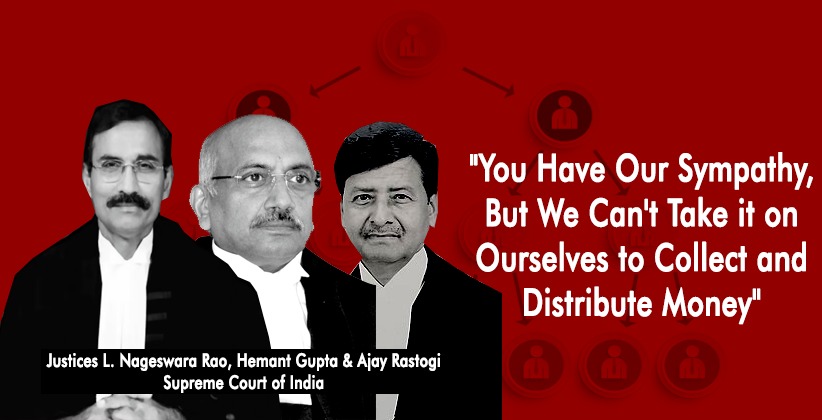 On Tuesday (17th November 2020), the Supreme Court asked for suggestions as to the relief which it may grant to the victims in the 2018 Ponzi scheme run by Future Maker Life Care Pvt Ltd, involving a fraud of thousands of crores of rupees.

A writ petition was filed by the aggrieved parties of the Ponzi scheme. This was heard by a bench of two judges: Justice L. Nageswara Rao, Justice Hemant Gupta, and Justice Ajay Rastogi.

Justice Rao said, “You have our sympathy, but the Supreme Court is not the right place. We can’t take it upon ourselves to collect and distribute money.”

He added by saying, “In the Saradha Chit Fund case, the Supreme Court had transferred all petitions to itself as several pleas had come to be filed in different states, In the present case transferring all petitions to one place may be one idea, but such a transfer to the Supreme Court or one High Court will not help you. Your concern is money- how is it to be collected? By sale of the property? How is it to be distributed? We cannot take this on ourselves.”

Justice Rao also said that the SEBI was asked to look into the fraud by the company, the issue of fictitious investors in the Sahara case as well. It was not asked to collect and distribute money.

A conference was carried on with the members of the bench after which Justice Rao said to the counsel for the petitioners, “You have our sympathy, but tell us how to give you relief. Give us suggestions, otherwise, we can not oblige.”

The petitioners were given 2 weeks' time to come up with suggestions and the matter was adjourned.

Reportedly, the Telangana police in March 2019 had filed FIRs against the company and its directors for cheating the common police. The fraudsters had propagated a false theme of life turning opportunity to earn income Rs.20,000 to Rs.1, 00, 000 per month and “inviting innocent public” to become members of their Ponzi pyramid scheme in the guise of direct selling multi-level marketing by selling worthless products such as suit length and edible products.

Funds were fraudulently collected from the subscribers as deposits towards membership in the scheme through a chain of agents spread across India as per the investigation done by PMLA. The personal accounts of the directors, their family members, and other associates had deposits collected through these schemes. These amounts were lying illegally diverted into their bank accounts.

Funds were also diverted to other shell companies incorporated by the two directors.