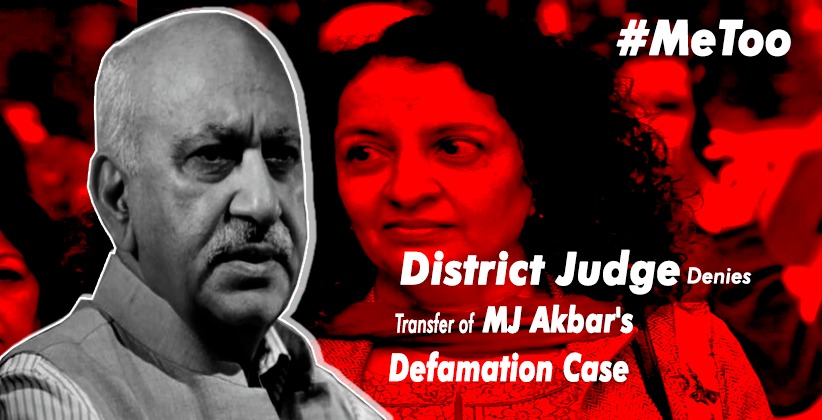 In 2018, at the height of the #Metoo movement journalist Ms. Priya Ramani, accused former Union Minister and BJP MP Mr. M J Akbar of sexually harassing her during the time when he was a senior editor and she used to work under him as a junior journalist. Other women journalists also came out with similar experiences with editor MJ Akbar.

This allegation cost Akbar his position as a minister. He then in October 2018 filed a criminal defamation case against Priya Ramani.

The case was being heard by a Special MP/MLA court for 2 years. When the case was at its last stage that is the final hearing, then at that point the Additional Chief Metropolitan Magistrate Vishal Pahuja listed the matter before a District and Sessions Judge of the Rouse Avenue District Court, New Delhi on October 14 for appropriate orders.

ACMM Pahuja cited directions issued by the Supreme Court relating to matters relating to lawmakers pending against courts. “There has been a direction from the Supreme Court... This case has to be placed before the learned District & Sessions Judge for directions. This court will only deal with cases against MP/MLAs…”

ACMM Vishal Pahuja said that “only matters filed against MPs and MLAs can be listed before the Rouse House Avenue Court” whereas the case filed by MJ Akbar, a former Minister of State for External Affairs, dealt with defamation.

This chance of transfer of case created a lot of confusion and frustration as it could have meant that the case had to start from starting. Addressing such confusion Sujata Kohli, District & Sessions Judge-Cum Special Judge reserved an order on the issue of transfer on October 14.

On 22nd October, Thursday, the Judge refused to transfer the defamation case away from a Special MP/MLA Court.

The next hearing of the case is set for 2nd November and will be continued by the ACMM.