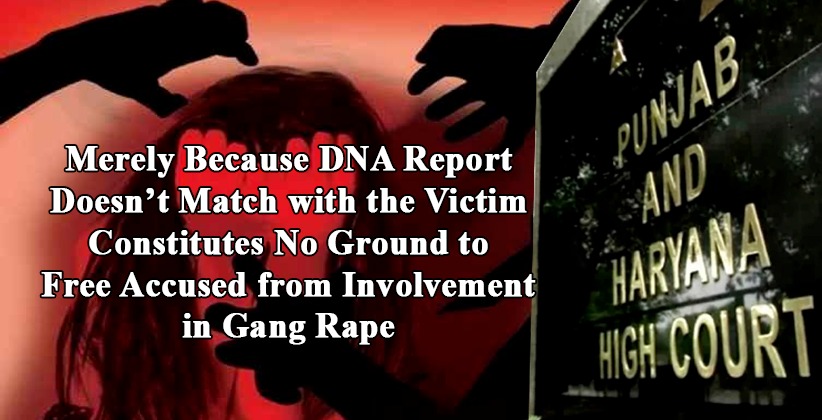 While denying bail top a gang rape accused, the Punjab and Haryana High Court observed, “Merely because the DNA report (of the rape victim) does not match with the petitioner cannot be termed to be a circumstance to conclude that the petitioner is not involved in the crime.”

The matter, concerning a bail plea, was heard by a single bench of Justice Vivek Puri. The petitioner was booked, in a FIR dated 4 May 2018, under Sections 342/363/366A/506 read with Section 34 IPC and Sections 6 and 7 of the Protection of Children from Sexual Offences Act (POCSO).

The FIR had been registered on the instance of the victim’s father. He alleged that in the intervening night of 3/4 May 2018, between 12:00 afternoon and 2 A.M., his daughter had come to his shop to give him tea. When returning back, she was kidnapped by three men- Bir Singh, Naveen (the present petitioner), and an unknown boy.

The complainant ran after their vehicle and afterward found her in a room, with the three boys present there. The victim told that she was subjected to gang rape by Bir Singh, Naveen, Sonu, and another boy. They threatened her that if she will disclose the incident to anyone outside, they will kill her, she added.

The learned counsel for the petitioner contended that the petitioner, Naveen, was found innocent during the investigation and was summoned under Section 319 Cr.P.C. one of the co-accused, Sonu, was granted bail by the Coordinate Bench of this Court, he added. Further, he submitted that the DNA report did not match with the petitioner.

The counsel for the complainant retorted, saying that the two cases are different, and the petitioner’s case is not at par with that of co-accused Sonu.

The petitioner had been summoned under Section 319 Cr.P.C. because the victim had leveled specific and categorical allegations against the accused persons. The petitioner was summoned vide Order dated 7 January 2019, which was upheld by the Court, vide order dated 9 July 2019 in CRR- 1423-2019, added the state counsel.

The Bench observed, “It is a case of gang rape and merely because the DNA report does not match with the petitioner cannot be termed to be a circumstance to conclude that the petitioner is not involved in the crime.”

“In her (victim’s) statement recorded during the course of the trial, the victim has specifically and categorically identified Bir Singh and Naveen, though, she has denied the implication of Sonu, co-accused. Merely because the petitioner was found innocent during the investigation cannot be construed as a mitigating circumstance to extend concession of bail,” it added.

The Court concluded that, in the given circumstance, no ground seems to provide for the extension of bail to the petitioner.