Home Judiciary Writ Petition Filed in SC for Replacing EVM With Name, Age, Educational Qualification, and Photograph of Candidates Instead of Symbols of Political Parties
Judiciary 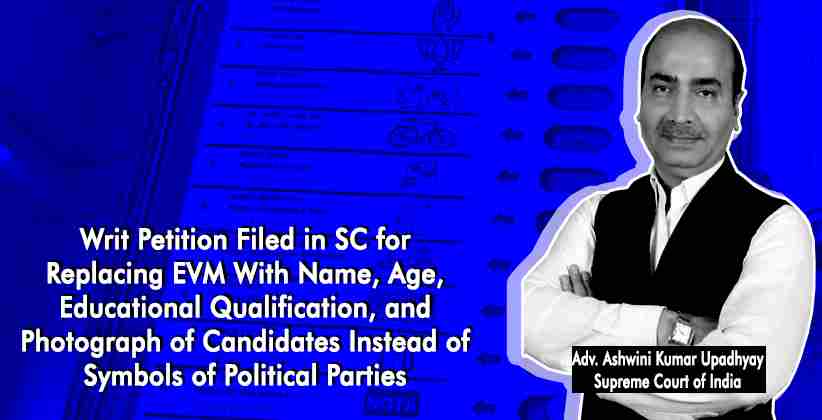 In the Supreme Court of India, a writ petition has been filed under Article 32 of the Constitution of India for using the name, age, educational qualification, and a photograph of candidates on ballot and EVM instead of the symbol of political parties.

This will secure an equal opportunity to all contesting candidates in spirit of the Articles 14, 15, and 21 of the Constitution of India.

The main objective of filing this writ petition is because the democracy of our country is suffering from seven major threats which are corruption, criminalization, casteism, communalism, lingusism, regionalism, and nepotism.

The above dangers can be overcome by replacing the symbol of the political party with the name, age, educational qualification, and photograph of candidates on the ballot.

If this comes into existence it will help electors to vote for honest candidates.

It will help in controlling the dictatorship of the political party in ticket distribution.

It will help in controlling communalism, lingusism, regionalism, and nepotism.

It will thus be a gateway for social activists and people who are honest will enter politics and thus work for the betterment of society.

The cause of action for this petition arose on July 1, 2019, as the petitioner Ashwini Kumar Upadhyay of this case

The concept of free and fair election which is the foundation of democracy has become dead due to the political party symbol on the ballot paper and EVM as the party promotes the candidates on the basis of regionalism and nepotism causing confusion between the voters.

The usage of the party symbol on the voting ballot breaches the rights under Articles 14, 15 read with articles 325- 326 of the Constitution of India which prevents the free exercise of the right to vote due to the use of money by candidates.

The use of party symbols is arbitrary and irrational as it enables the person with a criminal background to buy a ticket and contest election.

Thus, the use of the party symbol is illegal as well as unconstitutional and violative of Articles 14, 15, and 21 of the Constitution of India.