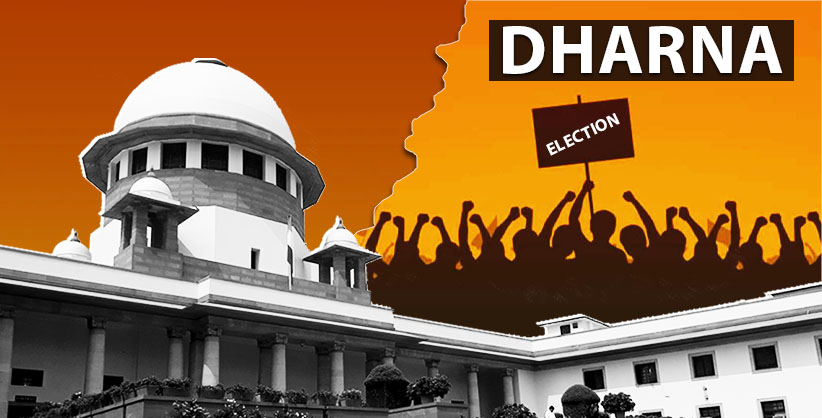 NEW DELHI: The Supreme Court on Wednesday said that a candidate's failure to disclose his conviction for non substantive offences like for holding a 'dharna' or protest would not amount to corrupt practices under the Representation of People Act, which can result his election being declared as void.

A bench of Justices S Abdul Nazeer and V Ramasubramanian said the provisions of the law can't be stretched to such an extent to declare the election of a candidate as void for such non disclosure.

The bench allowed an appeal by Ravi Namboothiri, whose 2015 election as councillor in Annamanada Gram Panchayath was declared null and void as he did not disclose his conviction and sentence of Rs 200 fine for an offence under the Kerala Police Act for holding a 'dharna' in front of the Panchayat office.

The top court said the District Court and the High Court were wrong in declaring the election of the appellant to be void on the ground that his failure to disclose in Form 2A, his conviction under the Kerala Police Act amounted to ‘undue influence on the free exercise of the electoral right’ and also a violation of Section 52(1A) read with Section 102(1) (ca) of the Kerala Panchayat Raj Act.

"The Kerala Police Act, 1960 is actually the successor legislation of certain police enactments of the colonial era, whose object was to scuttle the democratic aspirations of the indigenous population. This aspect should be kept in mind before applying blindfold, the principle ‘what is sauce for the goose is sauce for the gander’," the bench said.

All State enactments such as Kerala Police Act, Madras Police Act etc are aimed at better regulation of the police force and they do not create substantive offences. This is why these Acts themselves empower the police to issue necessary directions for the maintenance of law and order and the violation of any of those directions is made a punishable offence under these Acts, the bench pointed out.

"Once the object behind the provisions of the Kerala Police Act are understood, it would be clear that neither Section 52(1A) read with Rule 6 and Form 2A nor Section 102(1)(ca) of the Act nor the decisions in Association for Democratic Reforms, People’s Union for Civil Liberties (PUCL) or  Krishnamoorthy can be stretched to such an extent that the failure of the appellant to disclose his conviction for an offence under the Kerala Police Act for holding a  dharna in front of the Panchayat office, is taken as a ground for declaring an election void," the bench said.
[Read judgment]