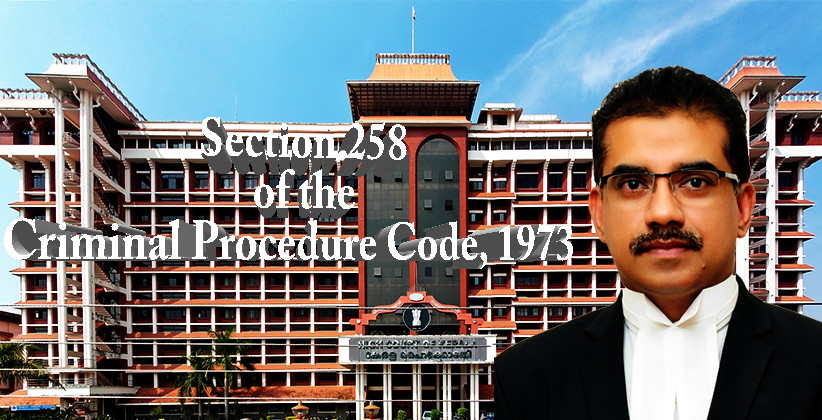 The Kerala High Court on May 20, 2019, has observed that a Magistrate cannot invoke Section 258 of the Criminal Procedure Code, 1973, to stop criminal proceedings merely because the accused had absconded or that despite the initiation of coercive proceedings, his presence could not be secured.

A single judge Bench of Justice Raja Vijayaraghavan V. was hearing revision petitions registered suo motu against the orders of discharge passed by the learned Judicial Magistrate of the First Class III, Kollam invoking the powers under Section 258 of the Cr.P.C.

It was brought to the notice of the court that the Judicial Magistrate had disposed a large number of cases pertaining, inter alia, to cases registered under Section 15(c) r/w. Section 63 of the Abkari Act, Section 27(b) of the Narcotic Drugs and Psychotropic Substances Act, and Section 279 of the IPC r/w. Section 185 of the Motor Vehicles Act.

On perusal of the proceedings sheet, the court observed that the accused were discharged owing to the failure of the prosecution to procure the presence of the accused before the court.

Taking into consideration Section 258 of the Cr.P.C., the court said that the section "can be invoked only in peculiar and unusual circumstances in cases, wherein no prima facie case is made out against the accused or when the accusation does not actually constitute an offence or for the reason that the prosecution is bound to fail on account of a technical defect. For the reason that the accused had absconded or that despite the initiation of coercive proceedings, his presence could not be secured is no reason to invoke Section 258 of the Cr.P.C."

Further, observing that the Judicial Magistrate had not made any genuine endeavour to secure the presence of the accused by exhausting the provisions under the Code, the court said "The order is laconic and is not supported by any reasons. The learned Magistrate has exceeded in its powers in invoking provisions of Section 258 of the Code and hence, cannot be sustained, the same being illegal and irregular."

Thus, the court allowed the revision cases and set aside the orders passed by the Judicial Magistrate and directed him to take back the cases on file and proceed with the same in accordance with law.