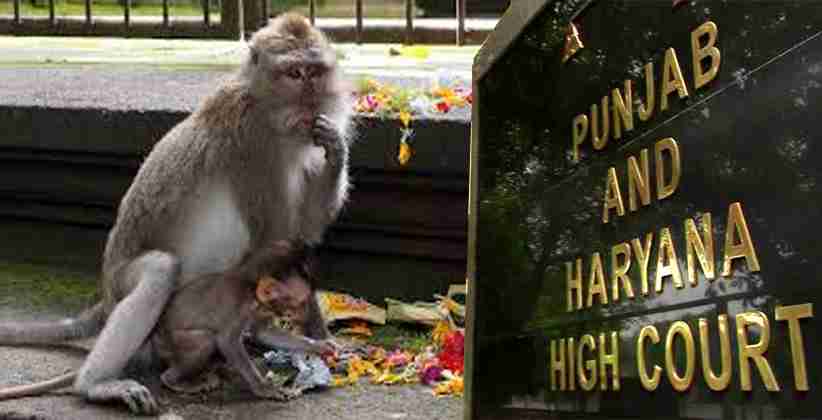 The bench headed by Justice Arun Monga of Punjab and Haryana High court was hearing a plea made by Divyam Dhakla of Shivalik Enclave, Mani Majra, Chandigarh requesting the court to provide a solution to prevent the havoc and disturbances created by Monkeys in the specific area which is causing danger towards individuals at a large number day by day. The petitioner also requested the court to take an immediate response from the Municipal Corporation, Chandigarh, and other higher authorities to provide a soluble action plan against such menace and havoc done by the monkeys.

The Court observed the facts and asked the Municipal corporation of Chandigarh to submit a report of providing an action plan and strategies for preventing the human numbers of such areas from these attacks and menace. The court further also called unjustified, cruel, and outrageous to kill these animals in the name of self-defense. The court also observed the fact that garbage-littering done by the locals of such areas and feeding monkeys out of religious aspects are one of the main causes for such menace.

On 05.08.2018, the petitioner pleaded that when he was going to his house on his scooter, he was attacked by a monkey, and also, he fell down from a vehicle and received injuries. It was also mentioned in the petition that in NAC Shivalik Enclave, Mani Majra, Chandigarh, the aforesaid menace is increasing day by day and the residents of the area are living under the atmosphere of fear.

It was submitted before the court that most of the time; residents keep themselves as well as their children in the house and do not venture on roads or parks, etc. At the time the monkeys would also jump all over the roofs, pelting stones over the people and causing injuries, grievous at times. It as argued that the monkey menace is increasing only because of the negligence of the Chandigarh Municipal Corporation.

Thereafter, the petitioner on 06.08.2018, sent a mail to the respondent authorities praying that the area to be sanitized from monkeys. But all in vain, as no steps, whoever was taken.

Significantly, the Counsel of the petitioner, in course of arguments, strenuously insisted on issuing a direction to the official respondents on the lines of the action taken in the adjoining State of Himachal Pradesh, where monkeys were declared as vermin species.

He also submitted that, declaring the monkeys as Vermin is that, it would not invite corresponding action on any resident, in case of self-defense, if a resident counter attacks a monkey, which may even result in getting killed, as long as in done in self-defense.

The monkey menace is self-created by the residents or the visitors to the adjoining religious establishment, where, invariably the visitors reside. The Court also said that ‘another contributor of Garbage littering is only the residents itself’, which is the said action of their part, itself becomes counter protective, in as much as the monkeys instead of being stable in their natural habitat, in the Sukhna forest, end up gathering around the said religious establishments, residential colony, owing to the easy availability of food.

The Court observed the joint task force report in which it is been clearly stated that full-time attendants have been appointed by the department to receive the complaint and respond with an action within 30 minutes by arriving at the place of incidence. The court further notices that the department has made specially designed cages to captures wildlife animals like monkeys and protect the human population from uncertain attacks. Considering such the court realize the steps and responses taken by the department are the best possible solutions for the present current situations.

In the parting, however, the Court directed that "The respondent No.2 shall file a supplementary specific action taken report, within a period of 6 mas to the exact number monkeys that may be rescued in the forthcoming 6 months and then released in their natural habitat/ Sukhna Wildlife Sanctuary."

Further, the Court said that the official respondents would also do well if they set up a special monkey sterilization center and, take appropriate steps one time drive to neuter the monkeys, in case it is found that the monkey population is alarmingly high enough, so as to be a burden even on the wildlife habitat. A census survey shall have to be then carried out as an essential prerequisite, before carrying out any sterilization drive.