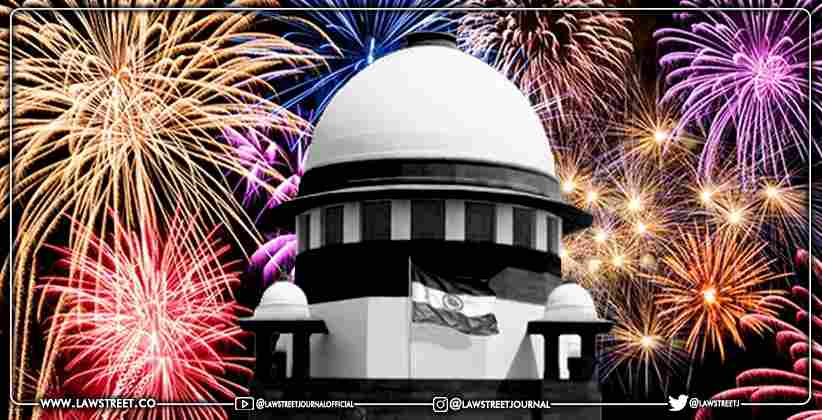 The Supreme Court ruled on Wednesday  (September 29, 2021), that the CBI's preliminary investigation into six Tamil Nadu-based firecracker manufacturers revealed that they were using barium and barium salts in the manufacture of firecrackers, in violation of the Court's ban on the use of such chemicals.

"Based on the report submitted by the CBI, it appears that the Court's earlier orders on the use of barium/barium salts, as well as orders passed by the Court on the labelling of fireworks, have been violated," the Court stated in its order.

The bench was hearing an application alleging a violation of an order dated February 10, 2017 prohibiting manufacturers from using certain chemicals that were dangerous and exceeded safety limits in their fireworks.

On Wednesday (September 29, 2021), a Bench comprised of Justices M R Shah and A S Bopanna took the preliminary inquiry report submitted by the Joint Director, Central Bureau of Investigation (CBI) at Chennai in response to the Court's earlier directions in an order dated March 3, 2020.

"The CBI preliminary inquiry report is serious. It has been revealed that a large amount of barium was purchased in the previous year. If it's illegal, how did you get it? This is a serious matter ", Justice MR Shah, the bench's presiding judge, stated orally after reviewing the report submitted by the CBI's Joint Director in Chennai.

Following a review of the preliminary inquiry report submitted by the CBI, the Bench concluded that the manufacturing companies had committed a "flagrant violation" of the Court's previous orders. It was discovered that the respondent manufacturers used banned chemicals such as barium and barium salts in the production of the firecrackers.

The Bench pointed out that the preliminary inquiry report was based on chemical analysis reports submitted by government laboratories, so there was no reason to doubt its veracity.

The Supreme Court, in an order dated October 23, 2018, prohibited the use of barium salts in the manufacture of firecrackers and advocated for the use of low-emission firecrackers.

"Several samples of finished, semi-finished, and raw materials were collected from manufacturing plants and sent for chemical analysis. Manufacturers have been found to have used barium and barium salts in many firecrackers ", the Bench noted.

The Court was also dismayed to learn that many of the respondent manufacturers had purchased large quantities of barium and barium salts, despite the Court's previous orders prohibiting such chemicals.

"It was also discovered that the labels of finished fireworks collected from factories did not include the chemical composition of the fireworks or the date of manufacture. This is a violation of the Explosive Rules of 2008 and Court orders regarding fireworks labelling ", the Bench went on to say.

On Wednesday, the Bench reiterated why FIR's and criminal proceedings should not be filed against the manufacturers based on the preliminary report of the CBI.

It believes that the respondent manufacturers are being given "one more chance" to present their case. As a result, ASG Aishwarya Bhati, appearing for the Ministry of Environment, Forests, and Climate Change, was directed to serve a copy of the preliminary inquiry report of the CBI on all concerned counsel of the respondent manufacturers, as well as senior advocate Gopal Sankaranarayan, appearing for the petitioner, by tomorrow.

The Court also granted leave to the manufacturers named in the allegations to file a counter-affidavit before the next hearing date. The case will be heard again on October 6, 2021.