The Allahabad High Court last week pulled up the Uttar Pradesh Government and stated that the payment of Rs. 450 per month to an employee as wages is clearly a form of forced labour and is violative of Article 23 of the Constitution.

The Allahabad high court directed the Director, Regional Institute of Ophthalmology, MD Eye Hospital, Prayagraj, to pay the minimum wages as prescribed in the state of Uttar Pradesh from June 15, 2001, which the date of initial appointment of the petitioner, within four months after deducting the amount paid to him till date.

Article 23 of the Constitution provides right against exploitation and prohibits traffic in human beings and forced labour and makes any contravention of this provision an offence punishable in accordance with law.

Allowing a writ petition filed by one Tufail Ahmad Ansari, Justice Pankaj Bhatia directed the Director, Regional Institute of Ophthalmology, MD Eye Hospital, Prayagraj, to pass order in respect of the regularisation of the petitioner within four months, as he had been working prior to December 31, 2001 and as per the 2016 rule of the state government, he is entitled to regularisation.

The writ petition was filed stating that the petitioner has been working as an employee in Director, Regional Institute of Ophthalmology, MD Eye Hospital, Prayagraj, since June 15, 2001 on a class-IV post and is being paid wages at the rate of Rs. 450 per month since his initial engagement. It was also stated that despite the petitioner being entitled for being considered for regularisation as per 2016 Rules, the case of the petitioner is not being considered.

After hearing the counsel for the petitioner and state government counsel, the court allowed the petition, observing, “In the instructions of the state government, it is admitted that the wages of Rs. 450 per month being paid to the petitioner are not the minimum wages prescribed in the state of Uttar Pradesh. This court is unable to fathom as to how the state can continue the exploitation of class-IV post employees for about 20 years on the strength of on the strength of government order, which has been relied upon by the UP government counsel in support of his contention. If the stand of the state counsel is accepted, this court would also be guilty of ignoring the plight of class-IV persons who are being exploited by the state.”

The court delivered this judgment on October 4.

Petition filed in the Allahabad High Court challenges the 'Sugam Darshan' System in Shri Kashi Vishwanath Temple, claims it is a 'way of collecting money' 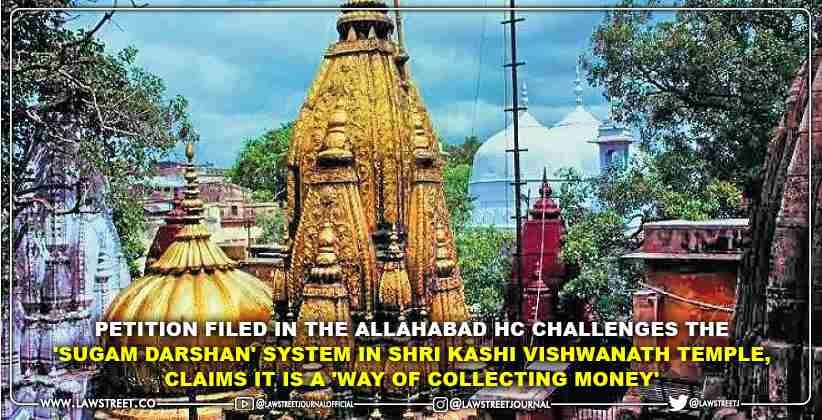 Judiciary Oct 08, 2021 Tmanna ( Editor: Ekta Joshi ) 6 Shares
6 Shares
A petition has been filed in Allahabad High Court challenging the 'Sugam Darshan' system, which was launched in 2018 and allows anyone to become a 'VIP' (Very Important Person) on amount of payment for the purpose of ‘darshan' in the Shri Kashi Vishwanath Temple in Banaras, Uttar Pradesh.It states that, "this ‘queue-less’, ‘hassle-free’ Darshan system is infact nothing but a way of collecting money."The petitioner, Gajendra Singh Yadav, a D.Phil. (Law) student at Allahabad University,...
Read full post