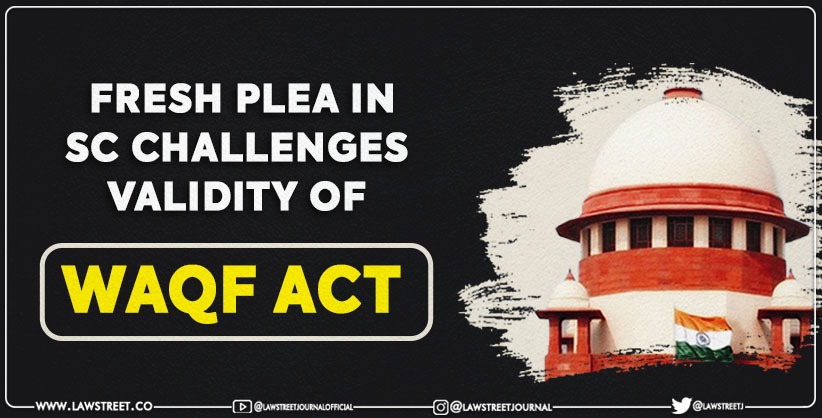 NEW DELHI: A fresh plea has been filed in the Supreme Court seeking a declaration that the provisions of the Waqf Act, 1995 were manifestly arbitrary, irrational and offended Articles 14-15 of the Constitution.

Gurugram resident, Vikash Kumar through advocate Bharti Tyagi, also pleaded for issuing a direction that the Centre can enact only Uniform Law for Trust and Trustees, Charities and Charitable Institutions, and Religious Endowments and Institutions as enumerated in Item 10 and 28 of the List-III Seventh Schedule in consonance with Articles 14-15, and can't make separate law for Waqf and Waqf properties.

The petitioner, who is social activist and advocate, challenged the constitutional validity of the various provisions of the Waqf Act 1995 inter alia on the ground that Parliament has no power to make special law in favor of a religious community giving it a special status while discriminating similarly situated Hindu and other non-Islamic religious communities, in violation of Articles 14, 15, 25, 27 and 300-A of the Constitution.

He also pointed out the basic right for filing suit before the Civil Court has been taken away by conferring those powers on Waqf Tribunal.

The tribunal cannot be substitute of Civil Court and Parliament cannot establish such forum beyond the scope of Article 323-A of the Constitution.

"Parliament has conferred special status to Waqf Boards and created special forum like Waqf Tribunal at the cost of State exchequer. The Act has given unbridled powers to Waqf Board for including any property even a trust property as Waqf property. There is no limitation for recovering the Waqf property whereas similarly situated trust and endowments face the embargo of law of limitation, there is no similar provision available to trust to regain its lost property," his plea said.

It also contended the Waqf Boards, in arbitrary manner without due process of law, are taking advantage of undue powers under the Act 1995 captured lands of other communities even the government and Nazul land over which no Muslim may have any right or claim.

The petitioner further contended that Hindu religious and charitable institutions are governed by the Religious Endowment Act 1863, the Indian Trust Act 1882 and Charitable and Religious Trust Act 1920.

These enactments have made provision for creation, management and resolution of disputes. The Waqf Act with uncontrolled powers to Waqf Boards and Waqf properties have been placed over and above other charitable religious institutions, he added.

BJP leader and advocate Ashwini Kumar Upadhyay has already filed a PIL questioning the validity of the Waqf Act. He sought transfer of his pending plea from the Delhi High Court to the Supreme Court.
[Read Plea]