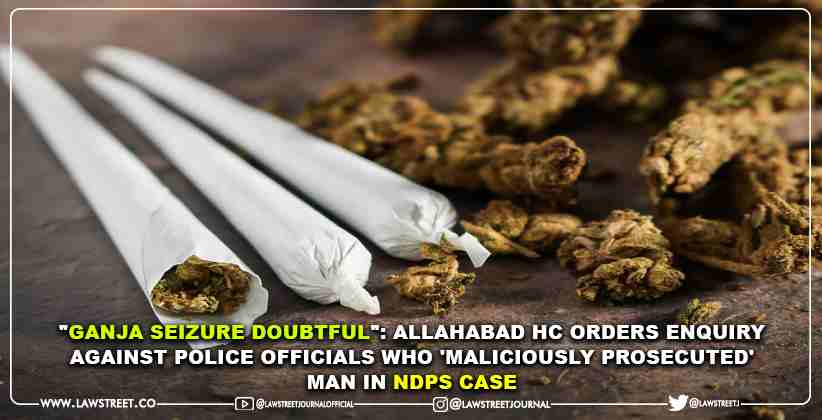 The Allahabad High Court recently came down heavily on Uttar Pradesh Police Personnel for maliciously prosecuting a man in the 29 KG Ganja (Cannabis) Seizure case after lifting him from his house at midnight and implicating him in an NDPS case.

The Bench of Justice Rahul Chaturvedi ordered an inquiry against the guilty police personnel and the registration of an FIR against them in case they are found guilty.

The case before the Court

The bail applicant before the Court had been booked for an Narcotics Drugs and Psychotropic Substances (NDPS) Act, 1985 offence by the UP Police after claiming that they seized about 29 KG of Ganja from him on June 11, 2021 and thereafter arrested.

The applicant claimed before the Court that the manner in which he was being involved/dragged in the case is depictive of a typical approach by the police and a false implication by them in nabbing the applicant.

It was contended by the counsel for the applicant that in fact, he was lifted from his residence in Hathras by four masked persons in civil dress. When his wife made a complaint to the Superintendent of Police, Hathras narrating the entire story for the alleged abduction of her husband by four-five masked persons, an inquiry was ordered.

In the said inquiry, it came on record that in fact, the people who had come to the house of the applicant in civil clothes are officers of Noida Police, however, Noida Police had not provided any information about coming to the police station or taking any person.

Essentially, the Court noted that four-five masked police personnel of P.S.- Phase II, G.B. Nagar pounced upon the man (applicant before the Court) from his residence, lifted him, and booked him in an NDPS Case without any rhyme or reason.

A.A.G. and G.A. candidly and fairly conceded the fact that there are excesses made on the part of the police of the concerned police station in the instant case. It was submitted before the Court there is neither any Aamad Report at the police station at Hathras nor the police personnel were in proper dress, nor any proper process was issued by the concerned court to arrest such type of persons.

This lifting of the applicant was affected way back on 11.6.2021 by those unnamed, masked persons and S.I. Ram Chandra Singh, in order to win the laurels of his senior officers, created a sham prosecution story implicating the applicant in this offence.

The Court, at the outset, noted that the entire modus oprendi adopted by the police, wherein the applicant had been lifted from his residence and planted in the present case, had made the entire prosecution story as "obscura nubes dubiorum" (under the dark cloud of doubts).

Noting that the applicant had a criminal history of 11 cases, the Court significantly observed thus:

"No doubt, the applicant has a criminal history of 11 cases, but no one has got an authority to add one more to his credit without having any substantial and credible evidence. In the criminal law, there is an aged old phrase "GIVE A DOG BAD NAME AND SHOOT HIM" and the police has done so in the present case."

The Court also observed that the alleged seizure of psychotropic substance too was a doubtful proposition and it made the entire prosecution story as malicious prosecution and the arrest an illegal one.

In view of this, the Court granted him bail and issued the following order with regard to action against the erring police officials:

"The Court records its strongest exception and concern about the way and the functioning of the police. The Court expects from the S.S.P. Gautam Budh Nagar to take stringent criminal action against the informant of the present F.I.R. and identify all those four-five masked persons in a civilian dress, who lifted the applicant from his residence on the odd hours of the night without any authority or reason, after holding an internal departmental inquiry by him alone, and if they are found guilty, the S.S.P., Gautam Budh Nagar is further directed to lodge an F.I.R. against all the erring persons including the informant of the Case...as well as all the four-five persons who were masked and pounced upon the applicant from his residence, lifted him and booked him in the present offence without any rhyme or reason and intimate the Court by filing a proper affidavit before the Court concerned i.e. the learned Additional District & Sessions Judge/F.T.C.-II, Gautam Budh Nagar latest by 31st December, 2021 as stringent action would also be taken against the S.S.P. concern for the willful defiance of this Court's order."