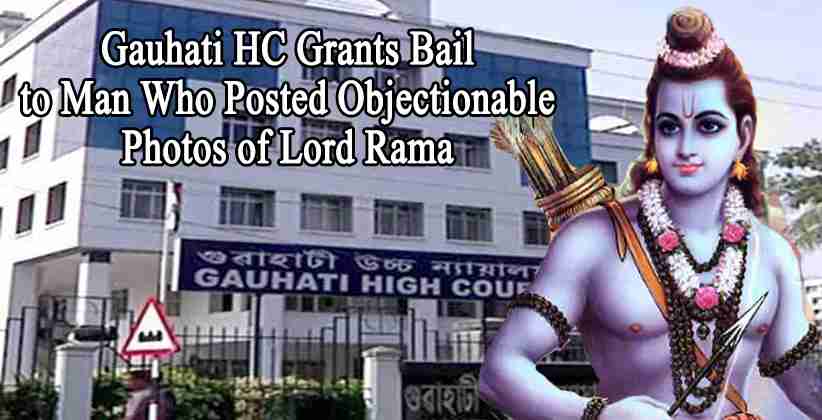 A bench of Justice Rumi Kumar Phukan of Gauhati HC on September 28th, 2020 converted an interim bail order to an absolute one. Hearing the Application which was filed under Section 438 of the CrPC by the petitioner named Altaf Hussain Choudhary the HC passed this order. The petitioner was accused of uploading objectionable photos of Lord Rama and also using some unparliamentary language on Facebook for creating a communal disturbance. The petitioner asked pre-arrest bail in the event of his arrest in connection with Hailkandi PS Case No. 657/2020, registered under Section 295 (A) 153(A) IPC, r/w Section 67 of the IT Act.

The accused commented on Facebook and also some of his friends replied though he apologized for the same post instantly and also he deleted the comment.

The witness examined by the court also said that they know about the apology. The court further said that post wasn’t made to create or promote enmity between communities and also the petitioner has already deleted the post and also has begged apology for his conduct.

The court further said that “By this application under Section 438 CrPC, petitioner, namely, Altaf Hussain Choudhury @ Altaf Choudhury, has sought for pre-arrest bail in the event of his arrest in connection with Hailakandi PS Case No. 657/2020, under Sections 295 (A)/153 (A) IPC, read with Section 67 of the IT Act. Heard the learned counsel for both the sides. Also perused the Case Diary produced. The allegation against the petitioner is that on 04.08.2020, the petitioner made a Facebook post, uploading some defamatory photos of Lord Rama and also used some unparliamentary words, with a view to creating a communal disturbance.

The Case Diary reveals that he made commenting lines on the post on Lord Rama and some of the Facebook friends also gave some reply. The accused immediately, beg apology and also deleted the comment from the post and he repented for the same. The witnesses examined have also stated that they know about the apology begged by the accused person after such a negative comment. Case Diary, however, does not reflect that such a post was made to promote enmity between different groups on the grounds of religion, race, etc., which is prejudicial to the maintenance of the harmony in the society. Further, the petitioner has already deleted the post and begged apology for his conduct.

In such a backdrop, it is the considered opinion of the Court that custodial detention of the accused petitioner is not warranted. Accordingly, interim bail granted earlier is hereby made absolute. Anticipatory Bail Application stands disposed of. Return the Case Diary”. The name of the case is Altaf Hussain Choudhary Vs. The state of Assam.