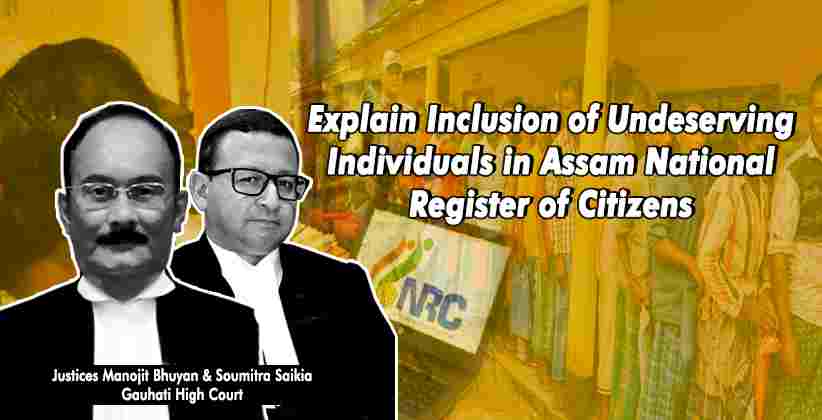 Gauhati High Court recently in its verdict asked the coordinator of the National Register of Citizens to explain how the name of the Petitioner got included in the Register despite the fact that at the relevant point of time, proceedings against her were continuing.

A Bench comprising of Justice Manojit Bhuyan and Justice Soumitra Saikia said, “Let the Assam State Coordinator, NRC file a comprehensive affidavit and bring on record the situations along with necessary particulars, whereby inroads into the National Register of Citizens may have been created by individuals who are undeserving and not legally entitled to be included in the National Register of Citizens”.

The Writ Proceedings were initiated by a resident of Nalbari District, Rahima Begum, against an order of the Foreigners Tribunal, declaring her as a foreigner of the post-1971 stream. The Court observed that the Petitioner’s name appeared in the NRC even when proceedings against her had been initiated and continued on the basis of reference made by the Superintendent of Police, Nalbari.

To be included in the NRC, one has to establish that he had been residing in Assam even before the cutoff date, or has to trace his legacy to ancestors who had been staying in Assam before such date. This has to be established through legacy documents i.e. a list of government-approved documents. The process had been lying dormant for nearly three decades.

The necessary rules for updating of Assam NRC were framed only in 2003.

The coordinator was directed to file an affidavit within 3 weeks on October 19.

The final list of Assam NRC was published on August 31, 2019, following the directions of the Supreme Court, excluding over 19 lakh persons out of 3.3 crore applicants.