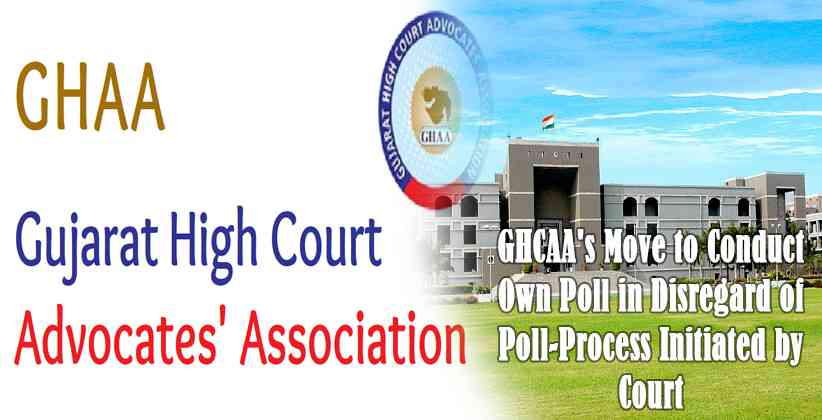 A Public Interest Litigation (PIL) has been filed before the Gujarat High Court on June 06, 2020, by advocate Amit Manibhai Panchal, after President of Gujarat High Court Advocates’ Association (GHCAA) Yatinbhai N. Oza had decided to run a poll eliciting views on the physical functioning of courts amid the COVID-19 pandemic.

The petition points out that GHCAA's move of conducting the online poll using a Google Form (which was circulated via a WhatsApp message in official groups of GHCAA) came hours after the Bench of Chief Justice Vikram Nath along with Justices RM Chhaya and JB Pardiwala told the office bearers of GHCAA, "...that a questionnaire would be brought out from the Court’s side in order to know the opinion of the members of the Bar on whether the Court could function normally or through virtual hearings". Thereby President has tried to make a case for opening up of the physical court while circumventing the process that had been initiated by the Honourable High Court itself. The Petitioner also says that the Questionnaire that was issued by the Honourable Court was to be submitted by June 02, 2020, however, in utter disregard of the process initiated by the Court, the President has sought to conduct its own poll using the medium of a Google Form.

The Petitioner also submitted that even before the time for responding to the Honourable High Court’s Questionnaire was complete, the President had written to the Honourable Chief Justice stating that as per the poll conducted by it, 64% of the members of the association had expressed their desire that Courts function physically. The Petitioner submitted that this was apparently done in order to influence the decision of the Honourable High Court of Gujarat, which was already in the process of seeking the opinion of the Learned Members of the Bar. The Petitioner further said that the results of the poll conducted by the Association itself had no legal sanctity. In the absence of a General Body Meeting, an online poll can at best be regarded as informal in nature.

The Petitioner further submitted that the conduct of proceedings through the physical medium or by videoconferencing is a decision that can only be taken by the Honourable Court. The Bar Council or the Bar Association cannot insist on the right of physical appearance before the Court. This is because the manner of conduct of court proceedings is solely in the domain of the Honourable Court.

The petition sought to declare the actions of GHCAA, i.e., issuing the WhatsApp message and conducting the voting poll, as illegal and contrary to established judicial discipline. It also prayed to restrain GHCAA from passing any further resolution with respect to the functioning of courts via video conferencing or physical hearing.

Besides that, the petition has sought for a writ directing the authorities for framing appropriate rules under the Gujarat High Court Rules, regarding proper conduct and discipline of members of the legal profession.