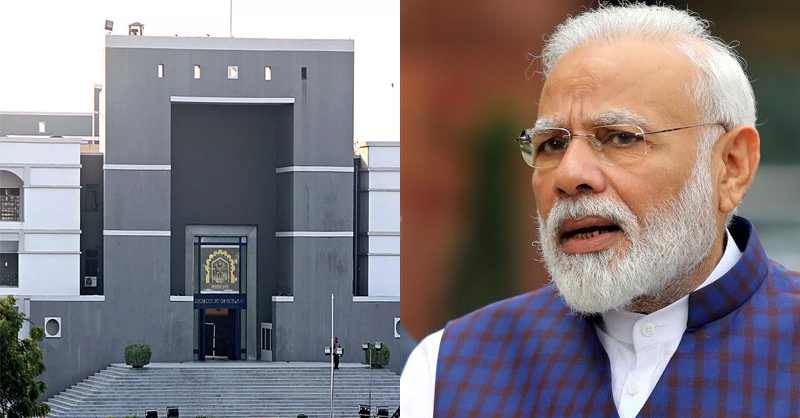 Gujarat Court on 6th September 2020 ordered the removal of Narendra Modi’s name from a civil suit that demanded damages for the murder of three British nationals during the 2002 post-Godhra riots. Prime Minister Modi at that time was the Chief Minister of Gujarat and the suit in which he was the defendant the petitioner pleaded that “he was constitutionally, statutorily and personally liable for being in complete command of the state machinery, on whose watch Gujarat riots of 2002 raged for days”.

The court said there is no single averment which suggests that if the name of defendant No. 1 is struck out then the matter cannot be adjudicated properly and also said that there is no adverse effect on the plaintiff’s plea on striking out the name of the defendant No. 1. Hence the court ordered to remove the name of Prime Minister Narendra Modi. The order was passed by the Judge. Sureshkumar Kaludan Gadhavi, Principal Senior Civil Judge, Prantij. The order said, “In my view, such reckless allegations without any basis, i.e. evidence, can hardly establish any nexus or help in raising cause of action against defendant No. 1”.

The court referred to the Order I Rule 10(2) of the Civil procedure Code, which reads:-“Court may strike out or add parties.- The Court may at any stage of the proceedings, either upon or without the application of either party and on such terms as may appear to the court to be just, order that the name of any party improperly joined, whether plaintiff or defendant, be struck out and that the name of any person who ought to have been joined, whether as plaintiff or defendant or whose presence before the court may be necessary in order to enable the Court effectually and completely to adjudicate upon and settle all the questions involved in the suit, be added.”

The improper party in the above means a person who has no connections with the reliefs claimed and therefore, it’s a neither necessary nor proper party. For this, the court relied upon the judgment of Mumbai International Airport Private Limited v/s. Regency Convention Center & Hotels Private Limited. A.I.R. 2010 SC 3109, according to this a necessary party is a person whose absence leads to an ineffective decree or whose absence would cause dismissal of the case, whereas a proper party is a party whose presence helps the court to adjudicate upon all matters in a particular suit filed.

The case dates back to the 2002 Gujarat riots. Three suits were filed in 2004 by few British citizens in the local court against Mr. Modi, then minister of state Home Gordhan Zadaphia and 12 others, seeking Rs. 20 crores as damages for the death of their three relatives- Saeed Dawood, Shakeel Dawood, and Mohammed Aswat- who were killed by a mob on National Highway 8 on 28th February 2002 while they were returning from Rajasthan.

The order said, “I have carefully gone through the entire pleadings of the plaint and found that not a single assertion, on the basis of which the plaintiff could sue defendant No. 1 as a co-defendant, is mentioned.” The court also said that “The plaintiff is deliberately dragging the suit which is evident from the record”.