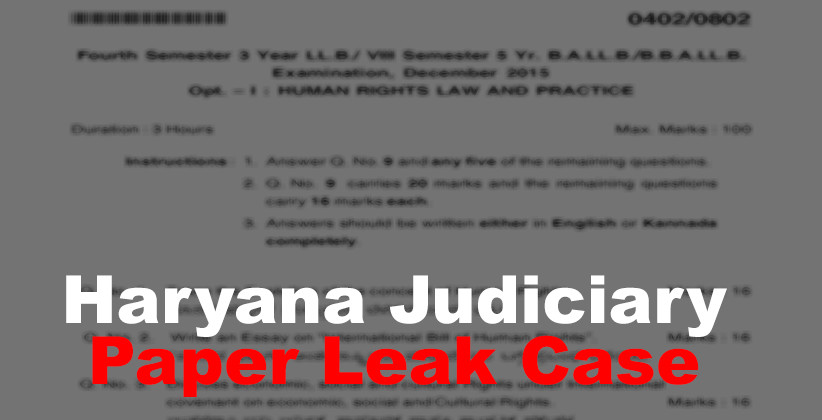 In the Judiciary Paper Leak case which happened in the year 2017 when the question paper for Haryana Civil Services (Judiciary) was leaked, a district court from Chandigarh decided to frame charges against Ex-High Court Registrar and nine others on Friday (January 31, 2020). An order was given by the High Court of Punjab & Haryana to hear arguments of the case on a day to day basis to frame charges which was completed within a week. The charges are framed against Balwinder Sharma, the then registrar of High Court, Sunita (considered to be the mastermind) and her aide Sushila, who gave the judiciary exam, Sunita’s Brother Kuldeep Kumar, Sunita’s aide Ayushi Godara, Ayushi’s father Shubhash Godara and maternal uncle Sushil Bhadu; leader of India National Congress (INC) Sunil Chopra and Advocate Tejinder Bishnoi. The Additional District & Sessions Court Judge Gagan Geet Kaur found Balwinder liable under Section Sections 8 (taking gratification, in order, by corrupt or illegal means, to influence public servant), 9 (taking gratification, for exercise of personal influence with public servant) and 13 (1) D (criminal misconduct by a public servant) of the Prevention of Corruption Act (PCA), 1988. Other charges which were framed against him are Sections 409 (criminal breach of trust by public servant, or by banker, merchant or agent), 420 (cheating and dishonestly inducing delivery of property), 120-B (criminal conspiracy) and 201 (causing disappearance of evidence of offence, or giving false information to screen offender) of the Indian Penal Code, 1860 (IPC).

Sections 8 and 9 of PCA and Sections 409, 420, 120-B of IPC was stimulated on Sunita as well. Moreover, the judge charged the other accused with Sections 409, 420, 120-B of IPC. While Ayushi Godara was in remand under Chandigarh Police’s Special Investigation Team (SIT), she wrote a letter addressing the Chief Justice of India whining about the torture which was meted out to her and threatened to commit suicide. The examination was planned to fill 109 appointments in subordinate judiciary and the Punjab & Haryana High Court. After the conclusion of the examination, a petition was filed by Suman, who wanted to register a criminal case to uncover the scam. She claimed that two-persons, namely Sunita and Sushila contacted her claiming that they have the examination paper. Before the examination, two questions from the exam were confessed to her and Justice Kuldip Singh in the initial stages found scores of Sunita and Sushila as exceptional in Unreserved and Reserved Category with minimum errors. The investigation which was executed by the in-house committee found that there were more than 700 calls and messages which got exchanged between the Registrar Balwinder Sharma and a candidate within a year. This resulted in a recommendation that an FIR was necessary to be filed against the Registrar and accused students. Thereafter, the Haryana (Judicial Branch) Preliminary Examination, 2017 was scrapped. The bench consisting of Chief Justice Krishna Murari, Justices Rajesh Bindal, Rajan Gupta, Gurmeet Singh Sandhawalia and Arun Palli ruled that a probe into the criminal case against the Registrar for recruitment and two-students be carried out by the Chandigarh Police.