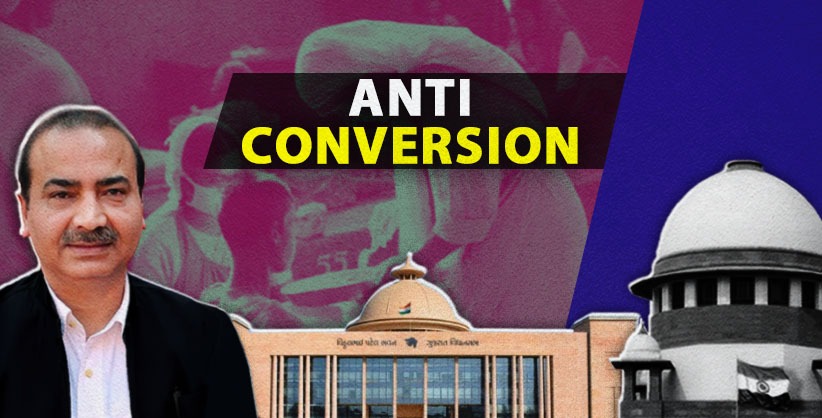 NEW DELHI: The Gujarat government on Saturday told the Supreme Court that its 2003 anti-conversion law is a validly constituted legislation, holding the field since last 18 years, so as to maintain the public order within the state by protecting the cherished rights of vulnerable sections of the society including women and economically and socially backward classes.

However, the High Court failed to appreciate that by staying the operation of section 5 of the Act of 2003, the whole purpose of the Act effectively stands frustrated, it added.

In a written reply to a PIL filed by advocate Ashwini Kumar Upadhyay, the state government said that its law -- passed in 2003 and strengthened in 2021-- contained precautions to ensure that the process of renouncing one religion and adopting another religion is genuine, voluntary and bona fide and at the time free from any force, allurement and fraudulent means.

Contending that the right to freedom of religion does not include a fundamental right to convert other people to a particular religion, the state government said, the High Court, however, stayed the operation of Section 5 of the Act of 2003, which is in fact an enabling provision for a person to get converted from one religion to another religion on his own volition.

"At the same time, the exercise of taking prior permission also obviates the forcible conversion and protects the "freedom of conscience" guaranteed to all the citizens of the country," it added.

The state government filed its response in which the court had earlier expressed its deep anguish over forceful religious conversion by observing that such conversions affect the security of the nation and violate citizens' right to freedom of conscience and right to freely profess, practice and propagate religion.

It said the Gujarat Freedom of Religion Act, 2021 was passed to strengthen the 2003 law to further prohibit and curb forced religious conversions.

However, the provisions of the law was stayed by the High Court by orders on August 19, 2021 and August 26, 2021 even in cases where marriage is solemnized by a person of one religion with a person of another religion without force or by allurement or by fraudulent means.

After filing a plea by the state government, the Supreme Court had on February 14, 2022 issued notice to Jamiat Ulama-I-Hind on whose plea by the HC passed the order. But since then the matter could not be listed before the top court for want of pleadings, it said.

The state government also said on December 2, an application has been filed to stay the High Court's orders to fully implement the 2003 law to prohibit religious conversions in the State of Gujarat by force, allurement, or fraudulent means as observed by this court in the orders of September 23 and November 14, 2022.