Home Judiciary A prostitute is herself an exploited person as per S. 370 of IPC (Trafficking of person), hence charges under S. 370 can’t be framed against her: MP HC [READ ORDER]
Judiciary 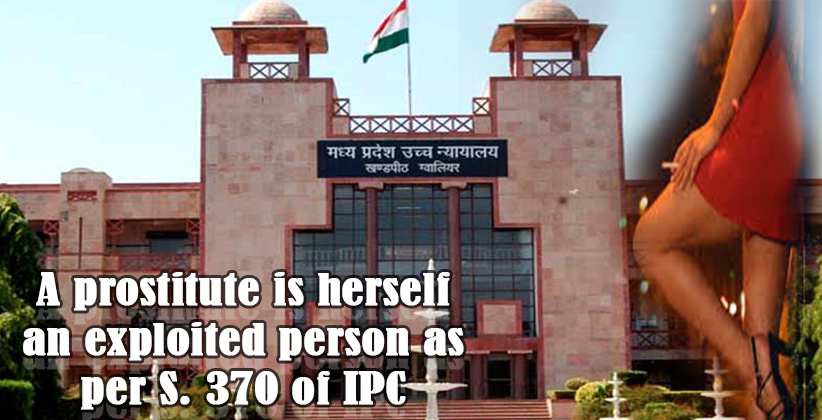 A Single Bench of Justice Rajendra Kumar Srivastava of the High Court of Madhya Pradesh, Jabalpur in a criminal revision matter held that the Prostitute is her a victim of trafficking, hence charges under S. 370 cannot be framed against her. Judgment to this effect was delivered on May 20, 2020.

Accused/Petitioner had filed Criminal Revision under Section 397 (Calling for records to exercise powers of revision) read with Section 401 (High Court's powers of revision) of Cr.P.C. to set aside the order passed by II Addl. Sessions Judge, Niwari, District Tikamgarh, whereby ASJ had framed the charge against the accused/petitioner under Section 370 (Trafficking of person) of Indian Penal Code, 1860 (IPC).

Secondly. —using force, or any other form of coercion, or

Thirdly. —by abduction, or

Fourthly. —by practicing fraud, or deception, or

Fifthly. —by abuse of power, or

(2) Whoever commits the offense of trafficking shall be punished with rigorous imprisonment for a term which shall not be less than seven years, but which may extend to ten years, and shall also be liable to fine.

On June 02, 2017, Sub Divisional Officer (P) Prithvipur, had received information that the act of prostitution was going on in the Residency Hotel at Prithvipur. Thereafter, he reached on the spot with other police officials. He found that the accused/petitioner was involved in prostitution activities with another co-accused. Thereafter, he seized the amount and other articles from the accused/petitioner and other co-accused. An FIR was lodged under Section 370 read with Section 34 of IPC and Sections 3 (Punishment for keeping a brothel or allowing premises to be used as a brothel), 4 (Punishment for living on the earnings of prostitution), 5 (Procuring, inducing or taking person for the sake of prostitution), 6 (Detaining a person in premises where prostitution is carried on) of Immoral Trafficking (Prevention) Act, 1956.

The contention of the parties:

The Holding of the Court:

“Accused/ petitioner is a lady. It is alleged that she was involved in prostitution. Section 370(1) of IPC provides exploitation of threats, using force or any other form of coercion, abduction or practicing fraud or deception, abuse of power by inducement, inducement including the giving or receiving of payments or benefits, in order to achieve the consent of any person having control over the person recruited, transported, harbored, transferred or received, commits the offense of trafficking. Admittedly, the accused/petitioner is a lady and she cannot be considered to be exploiting herself, so as to bring her within the ambit of Section 370. In fact, she is the person who would be considered as being exploited under Section 370 of IPC.”