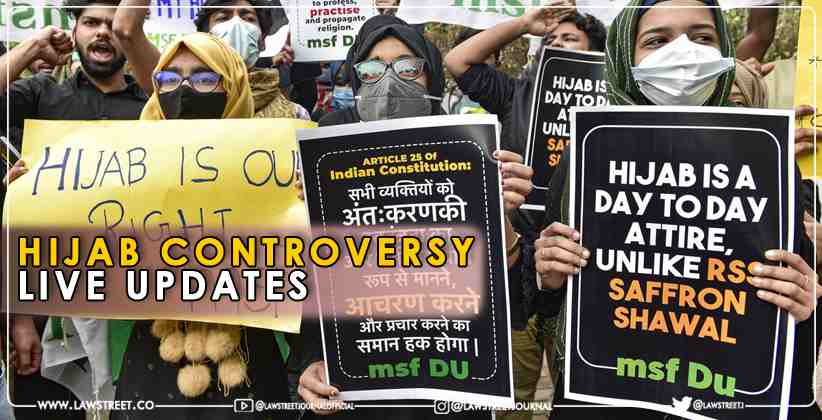 Karnataka High Court Full Bench will continue hearing on a batch of petitions challenging the hijab ban in educational institutions.

On Friday the Court requested the State to re-open the educational institutions at the earliest and has restrained students from wearing any sort of religious clothes in classrooms, regardless of their faith, while the matter is pending hearing.

It is the petitioner's case that the right to wear hijab is an essential religious practice under Islam, and the State is not empowered to interfere with such rights under Articles 14,19 and 25 of the Constitution.

Kamat had underscored that the declaration made by the State government that wearing of a headscarf is not protected by Article 25 of the Constitution was "totally erroneous'.

It was also submitted that the conduct of the State government in delegating to the College Development Committee (CDC) to decide whether to allow headscarves or not is 'totally illegal'.

On Wednesday Prof Ravivarma Kumar, Senior Advocate, appearing on behalf of the petitioners argued that the state is discriminating against Muslim girls, solely on the basis of their religion.

He highlighted that the Government Order dated February 5 targets wearing of hijab whereas other religious symbols are not taken into account. This leads to hostile discrimination violating Article 15 of the Constitution.

He referred to the principle of manifest arbitrariness used by the Supreme Court to strike down triple talaq in the Shayra Bano case. "They are only putting one apron over their head.