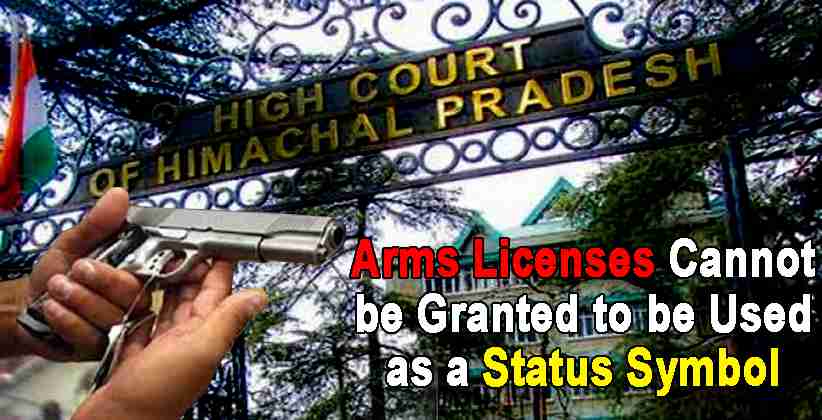 The Himachal Pradesh High Court said that arms licenses cannot be granted to be used as a status symbol. This statement came while directing the authorities to review all the Arms Licenses granted by them.

This was heard by a bench of two judges: Justice Tarlok Singh Chauhan and Justice Jyotsna Rewal Dua. They dismissed the petition which was filed by a person as two Arms Licenses of his were canceled.

Section 17 of the Arms Act empowers the Licensing Authority to vary the condition of the grant of a license, suspend a license for a specified period or even revoke a license.

The petitioner had applied and obtained another arm license without disclosing the fact that he previously had an arms license. The court also got to know that the petitioner had kept Column no. 10(a) blank knowingly. This column requires a person to provide all the details of any previous Arms License. Hence, the petitioner cannot claim “the plea in ignorance of the law” as a column was specifically mentioned.

The court also said that in this case, there is an indication of issuance of arms licenses at the mere asking of the applicants without verifying compliance of the provisions of the Act/Rules/Instructions issued in this regard and observed: “The Arms Act coordinates rights of citizens with the necessity of maintaining law and order. Firearms should not come in possession of anti-social elements. There is a need for greater vigilance of the grant of Arms Licenses. Arms Licenses cannot be granted to be used as a status symbol of the applicants.”

The bench while dismissing the writ petition said that “We, therefore, direct that henceforth no arms license shall be granted or renewed in case the applications do not meet the parameters prescribed in this behalf under the Act, the Rules framed thereunder or any instructions issued by the Competent Authority. We also direct all the Licensing Authorities in the state to review all the Arms Licenses granted by them on the touchstone of the above parameters and take appropriate action in accordance with the law, wherever required. This exercise is completed within a period of four months from today”.