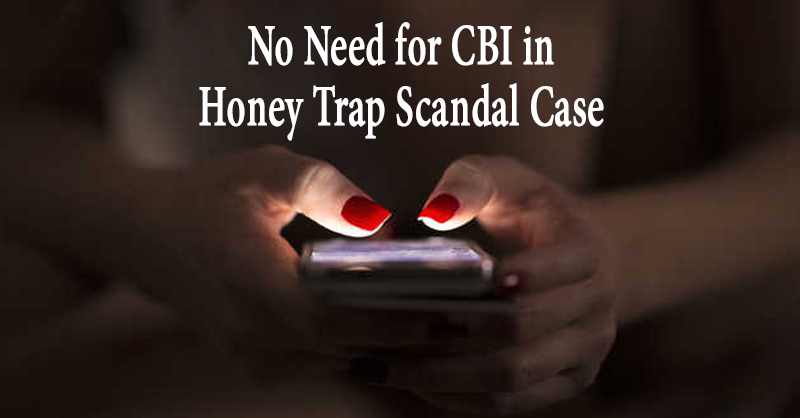 On 5th September 2020, the Indore bench of Madhya Pradesh High Court consisting of Justice SC Sharma and Justice Shailendra Shukla ordered that there will be no CBI inquiry in the “Honey Trap Scandal” case. The bench was of the view that they find no valid reason to initiate a CBI inquiry or transfer the inquiry to the Central Bureau of Investigation and that they were satisfied by the inquiry of the SIT or the Special Investigation Team. The court said: -

“This Court has carefully gone through the entire cases referred by learned counsel for parties, heard counsel for the parties at length, and no material was brought before this Court on the basis of which it could have been held that the investigation has not been done properly by the State of Madhya Pradesh. In the light of aforesaid, this court does not find any reason to transfer the investigation to the Central Bureau of Investigation”.

The court said that the investigation of the Special Investigation Team is going on under section 178(8) of the Code of Criminal Procedure and the progress report has been submitted to the court along with entire material, which was considered by this court while holding proceedings in camera, has already been returned to SIT Chief and only one sealed cover, which has been retained for dictating the judgment, has been handed over back to Awdhesh Kumar Goswami, the officer in charge for investigation. The court also said that the SIT is free to take actions in the ambit of law as soon as the CFSL report is received from Hyderabad and shall also submit the progress report to the Principal Registrar of this court in respect of action taken further.

This whole case started when one Harbhajan Singh, Superintending Engineer, Municipal Corporation, Indore filed a complaint that he was being blackmailed and a ‘Honey Trap’ gang is working in the State of Madhya Pradesh which blackmails the high profile politician, bureaucrats, businessman, etc, and it became petitioners contention since the petitioner is a social worker and hence the petitioner filed a petition under Article 226 in the High Court of Madhya Pradesh. The engineer was ultimately suspended by the IMC. On 17th September 2019, two women were arrested, and later on, police also seized a large number of electronic gadgets.

The petitioner was of the view to transfer the case to CBI since many influential people were involved in this case hence it could make the investigation a bit lose, but the court held that we cannot transfer the case to CBI only because the petitioner thinks that police investigation might be compromised. For this, the court relied upon the judgment of Skiri vasu v/s The State of U.P. & others (2008) 2 SCC 409 in which the High Court held that “ a CBI inquiry cannot be ordered as a matter of routine or merely because the parties have made some allegations”. The High Court in this matter said that the power of the High Court to probe CBI investigation “has to be exercised sparingly, cautiously in exceptional situations and an order directing CBI to conduct an investigation is not to be passed as a matter of routine or merely because the parties have leveled some allegations against the local police”. With this, the writ petition stood disposed of, and the order passed by the court in the present case will govern the connected writ petitions also, therefore, the other writ petitions also stood disposed of.