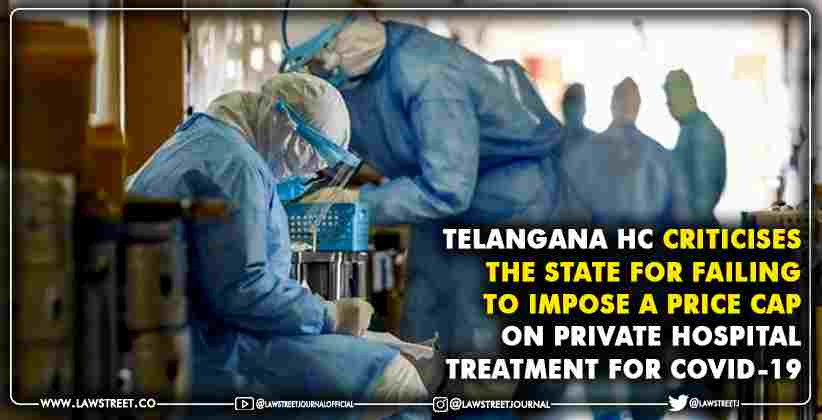 The High Court of Telangana slammed the State Government on 1st June for failing to set a fee cap for private institutions treating COVID-19 patients in the state. Chief Justice Hima Kohli with Justice B. Vijaysen Reddy observed that people have been mortgaging gold to pay bills.

The State Government was ordered by the High Court on 18th May, 2021 to produce a new Government Order adjusting the prices for normal ward, oxygen beds, ICU beds, ventilator beds, ambulance charges, and other costs in private hospitals and nursing homes.

It was learned that no decision was made in this regard. AG was being rather stubborn, the bench noticed and stated that they didn't give you a choice, and had told AG what to do. They haven't even set a price limitation for fundamental items like PPE kits. And the bench enquired angrily if they were waiting until the pandemic is ended before announcing the prices.

As an instant remedy against excessive invoicing, the Advocate General stated that delinquent hospitals are being sanctioned by having their licence to treatCOVID-19 patients revoked. Justice Kohli enquired, where are the patients meant to go if their licences are being revoked at such a time?  And if it was wise to terminate licences rather than beefing up hospital staffing?

She suggested that hospitals should be compelled to return the excessive fees or face having their licences revoked. And further stated that someone whose funds are frozen with these hospitals will be dissatisfied by the cancellation. The hospital might have directed a refund at the cancellation deadline. Because the worst has already happened, hospitals will no longer bother to listen to the patients' requests.

The Director of Public Health and Family Welfare, Government of Telangana, has been summoned to appear before the Court on 2nd June, virtually, to address the same problem. He will however address the Court on other topics that the State's affidavit does not address. The following are some of the issues: