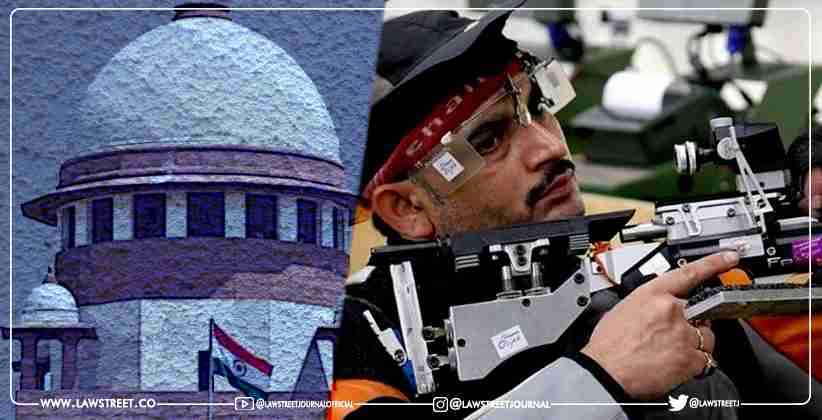 The Supreme Court of India on August 2, Monday instructed the Paralympic Committee of India to nominate Naresh Kumar Sharma as an extra contestant in the Tokyo Paralympic Games, which came as a massive relief to the five-time Paralympian shooter.

Previously on August 2, senior advocate Vikas Singh, representing the petitioner, brought the case before a bench led by Chief Justice N.V. Ramana and requested an urgent hearing, citing the fact that the deadline for shortlisting for the Tokyo Paralympics is August 2, and if the case is decided on August 6, as timetabled by the Delhi High Court, the plea will be rendered infructuous.

Later that afternoon, Justices A.M. Khanwilkar, B.R. Gavai, and Krishna Murari convened a bench to hear the case. The bench ordered the board to suggest Sharma's profile as an extra candidate or participation in the 50 m para shooter category of the Paralympics as soon as possible after hearing the submissions.

Sharma had protested his disqualification from the international tournament for physically challenged athletes in the Delhi High Court with advocate Satyam Singh. The high court noted that the committee's judgment was arbitrary, but it did not issue urgent instructions for his placement on the list.

The high court ordered the Sports Authority of India and the Union Ministry of Youth and Sport Affairs to investigate his non-selection after hearing his case on August 6.

In a stunning turn of events in the case of 5-time Paralympic shooter and Arjuna Award winner Naresh Kumar Sharma, the International Paralympic Committee (IPC) has announced that one additional Indian athlete would not be allowed to compete in the Tokyo Paralympic Games, which begin on August 24.

Upon prima facie noting that his disqualification was unjust, the Supreme Court instructed the Paralympic Committee of India (PCI) to suggest his name as an additional participant in the 50 metre parashooter event at the Tokyo Paralympics. The PCI was also required by the Court to report compliance.

However, in an email to PCI, the international committee informed that India has earned only 10 slots in the qualification event, and hence an additional slot cannot be given.

On August 2, a bench headed By justice AM Khanwilkar, BR Gavai, and Krishna Murari instructed the PCI to suggest his name as an extra participant in the Tokyo event without dislodging already selected applicants. He has previously appealed his exclusion from the international tournament for physically challenged athletes in the Delhi High Court. Despite the fact that the Committee's decision was arbitrary, the High Court did not issue immediate orders for his inclusion on the list.

The bench issued the order after noting that the High Court had ruled that the PCI's decision to exclude Sharma was inappropriate. In view of the High Court's findings, the petitioner should have prevailed before the High Court, and appropriate instructions should have been imposed to the PCI to include him as a participant in the event, according to the Supreme Court.

Sharma has filed an appeal with a Division bench of the Delhi High Court against a Single Judge judgement refusing to intervene in the Paralympic Committee of India's (PCI) judgment not to select him for the Tokyo 2020 Games.

Sharma said that the PCI Selection Committee used the qualifying criterion laid down in the National Sports Development Code of India 2011 incorrectly while shortlisting applicants. He had claimed that the Committee had mistakenly picked one Deepak to compete in the R7 category at the Tokyo Paralympics in his spot.

According to him, a para shooter must have competed in at least two WSPS-approved international tournaments to be able to compete in the 2020 Tokyo Paralympics (World Shooting Para Sports). Singh argued that the claimed Deepak had only competed in one such event, and that the Committee had incorrectly used the Serbia Grand Prix to calculate his marks, despite the fact that the event is not a recognised WSPS competition under Rule 1.2 and 2.9.

PCI had argued before the High Court that its goal was to find the appropriate person for the games, and that Deepak was determined to have the highest score in the relevant area. The Court was also notified that the Serbia Grand Prix was one of the World Shooting Para Sports (WSPS) tournaments in which Sharma declined to compete.