“Indirect Discrimination Even Without Discriminatory Intent Must Be Prohibited” :SC on Permanent Commission for Women Army Officers 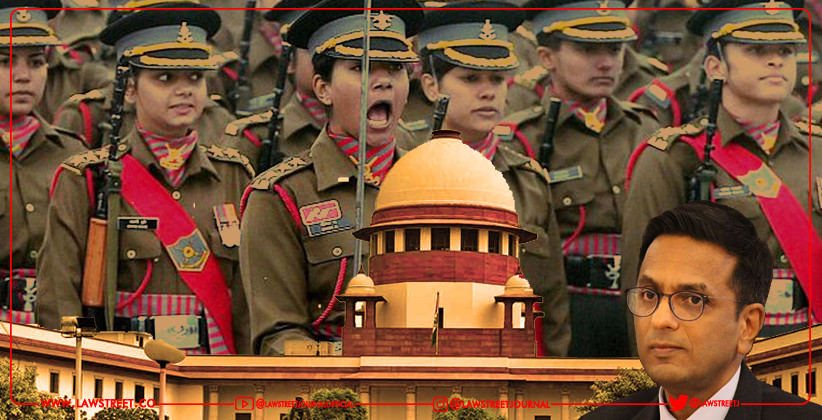 Judiciary Mar 30, 2021 Tanya Sehrawat ( Editor: Ekta Joshi ) 3 Shares
3 Shares
The Supreme Court discussed the ‘doctrine of indirect discrimination’ in the judgement that declared the evaluation criteria adopted by the Indian Army to consider granting permanent commission to the Women Officers as “arbitrary and irrational.”

The judgement was authored by DY Chandrachud who went on to observe how discrimination is not of conscious design or malicious intent, it can just be a function. However, not being able to recognise the existing structures along with their way of doing things can have consequences like freezing an unjust status quo. It was also observed that for even sans discriminatory intent must not be allowed in order to achieve the levels of substantive equality that our constitution proposes.

The Bench tried observing the difference between direct and indirect discrimination. It said that the former was based on intent while the latter was based on effect.

Statistical Evidence as a Way to Prove Indirect Discrimination

As Professor Sandra Fredman notes, "Aptitude tests, interview and selection processes, and other apparently scientific and neutral measures might never invite scrutiny unless data is available to dislodge these assumptions." Consistent with the Canadian Supreme Court's approach in Fraser (supra), we do not think that it would be wise to lay down any quantitative thresholds for the nature of statistical disparity that must be established for a claimant to succeed. Equally, we do not think that an absolutist position can be adopted as to the nature of evidence that must be brought forth to succeed in a case of indirect discrimination.  The absence of any statistical evidence or inability to statistically demonstrate exclusion cannot be the sole ground for debunking claims of indirect discrimination. This was clarified by the European Court of Human Rights in a case concerning fifteen Croatian of Roma origin claiming racial discrimination and segregation in schools with Roma-only classes. In assessing the claims of the fifteen Croatians, the court observed that indirect discrimination can be proved without statistical evidence. Therefore, statistical evidence demonstrating patterns of exclusion, can be one of the ways to prove indirect discrimination. A Two Stage Test to Enquire Indirect Discrimination

“Insofar as the fashion in which the indirect discrimination enquiry must be conducted, we think that the two-stage test laid down by the Canadian Supreme Court in Fraser (supra) offers a well-structured framework of analysis as it accounts for both the disproportionate impact of the impugned provision, criteria or practice on the relevant group, as well as the harm caused by such impact. It foregrounds an examination of the ills that indirect discrimination seeks to remedy.

First, the Court has to enquire whether the impugned rule disproportionately affects a particular group. As an evidentary matter, this entails a consideration of material that demonstrates that "membership in the claimant group is associated with certain characteristics that have disadvantaged members of the group". However, as such evidence might be hard to come by, reliance can be placed on evidence generated by the claimant group itself. Further, while statistical evidence can serve as concrete proof of disproportionate impact, there is no clear quantitative threshold as to the quantum of disproportionality to be established for a charge of indirect discrimination to be brought home. Equally, recognizing the importance of applying a robust judicial common sense, the Court held: "In some cases, evidence about a group will show such a strong association with certain traits— such as pregnancy with gender—that the disproportionate impact on members of that group will be apparent and immediate.” “Second, the Court has to look at whether the law has the effect of reinforcing, perpetuating, or exacerbating disadvantage. Such disadvantage could be in the shape of: "[e]conomic exclusion or disadvantage, [s]ocial exclusion…[p]sychological harms…[p]hysical harms…[or] [p]olitical exclusion", and must be viewed in light of any systemic or historical disadvantages faced by the claimant group.” Resisting the Temptation to Accept Generalisations

“While assessing the justifiability of measures that are alleged to have the effect of indirect discrimination, the Court needs to return a finding on whether the narrow provision, criteria or practice is necessary for successful job performance. In this regard, some amount of deference to the employer/defendant's view is warranted.

Equally, the Court must resist the temptation to accept generalizations by defendants under the garb of deference and must closely scrutinize the proffered justification.  Further, the Court must also examine if it is possible to substitute the measures with less discriminatory alternatives. Only by exercising such close scrutiny and exhibiting attentiveness to the possibility of alternatives can a Court ensure that the full potential of the doctrine of indirect discrimination is realized and not lost in its application.” A lot of judgements were referred from US, UK, Canada, and South Africa while making the observations above. The Court also highlighted judgements like Navtej Singh Johar v. Union of India (Homosexuality), Indian Young Lawyers Assn. v. State of Kerala (Sabarimala) and Joseph Shine v. Union of India (Adultery). In all these judgements the doctrine of indirect discrimination had found its place.  Systemic Discrimination Antithetical to Substantive Equality The court of law said that systematic discrimination is antithetical to substantive equality. Indirect discrimination, being a tool of jurisprudential analysis can result in the redressal of various inequalities by probing provisions criteria or practice having a disproportionate and adverse impact on members of groups that belong to groups that are constitutionally protected from discrimination under Article 15(1). The Bench observed the following:

“Therefore, an analysis of discrimination, with a view towards its systemic manifestations (direct and indirect), would be best suited for achieving our constitutional vision of equality and antidiscrimination. Systemic discrimination on account of gender at the workplace would then encapsulate the patriarchal disadvantage that permeates all aspects of her being from the outset, including reproduction, sexuality and private choices which operate within an unjust structure. In propounding this analysis, this Court is conscious of the practical limitations of every framework to understanding work, considering the bulk of litigation against systemic discrimination, would be from members of an organized and formal workforce who would have the wherewithal and evidence of patterns or practices to bolster their claims.

For the laboring class in India, which is predominantly constituted by members facing multiple axels of marginalization, litigating their right to work with equality and dignity may be a distant dream. However, it is our earnest hope, that a vision of systemic discrimination, would aid members of even informal workforces who, in addition to battling precarity at their places of work, will be able to assert a right to equality and dignity. A framework that would situate their discrimination, against systemic societal pattern of discrimination that are constituted and compounded by social and economic structures, would help in addressing several fractures that are contributing to inequality in our society.