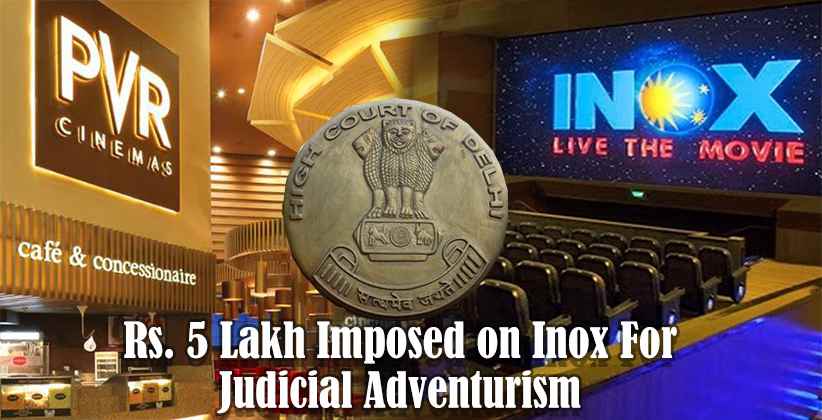 A single Judge Bench of Justice Rajiv Sahai Endlaw of the Delhi High Court has imposed a cost of Rs 5 lakh on INOX Leisure Limited for indulging in judicial adventurism in connection with a suit against PVR on May 18, 2020. Inox Leisure Ltd. and PVR Ltd. are a market competitor in running and operating multiplex cinemas.

After laying down the facts, the Court immediately noted as follows:

“it appears that the suit as framed is directed not only against the defendant but also against others who have not been impleaded. During the hearing, it emerged that besides the plaintiff and the defendant there are only one or two others carrying on the same business but on a much smaller scale than the plaintiff and the defendant. The effect of granting the injunction as sought against the defendant, would be that the defendant even if has entered into agreements with the developer/owner of the Amritsar and Juhu, Mumbai properties, would be unable to proceed under the said agreements, leaving the developer/owner aforesaid in a lurch with respect to their properties meant for running and operating multiplex cinemas and who will have no option but to accept whatever commercial terms the plaintiff offers. Such damage is also sought to be inflicted on the owners of other multiplex properties across India, without affording them even an opportunity to be heard.”

The defendants argued that impleadment of a necessary party is mandatory and in the case of non-joinder of a necessary party, the plaintiff may not be entitled to the relief sought. To this and by relying on J.S. Yadav Vs. State of Uttar Pradesh (2011) 6 SCC 570, the plaintiff argued that the suit cannot be defeated for the said reason and the Court always as held in Yusuf Mohamed Lakdawala Vs. Sudhakar Kashinath Bokade 2007 SCC OnLine Bom 939 has the option to implead the party.

The Court concluded that,

“It is not for the Court to make out a case for the plaintiff by impleading such owners as parties to this suit.”

Summarising the law with respect to contracts, immovable property and specific performance (codified in the Indian Contract Act, 1872, Transfer of Property Act, 1882 and the Specific Relief Act, 1963), the Court states:

“that any right in immovable property, whether by way of sale or lease, can be transferred or created only by a registered document and in the absence of registration, the deed of sale even if executed, at best constitutes an agreement to sell and the deed of the lease even if executed with the delivery of possession, at best is a lease from month to month, terminable by a 15 days’ notice; a deed of the lease even if executed and registered, but without delivery of possession, entitles the lessee only to sue for possession; an unregistered deed of lease, even if executed, till delivery of possession does not constitute a month to month lease even and at best can be construed as an agreement to lease; (ii) an agreement to, in future, create a right in immovable property by way of sale or lease, confers on the agreement purchaser or the proposed lessee, only a right to seeks specific performance and does not confer any right in the immovable property subject matter thereof”

The Court held that the plaintiff had without any demur accepted refund of the security deposit paid with respect to the Amritsar property, signifying its acceptance of the termination of the arrangement, whatsoever it was with the developer of the said property. The Court also noted that in the absence of the developer/owner of the properties at Amritsar, who is a necessary party, the suit cannot be determined and hence liable to be dismissed.

In the end, the Court held that,

The Court also imposed costs of Rs.5,00,000/- payable to the defendant for indulging in judicial adventurism.

Gujarat HC To State: Private Hospitals Should Not Be Permitted to Charge Exorbitant Amounts for Treatment Of COVID-19 Patients [READ ORDER]