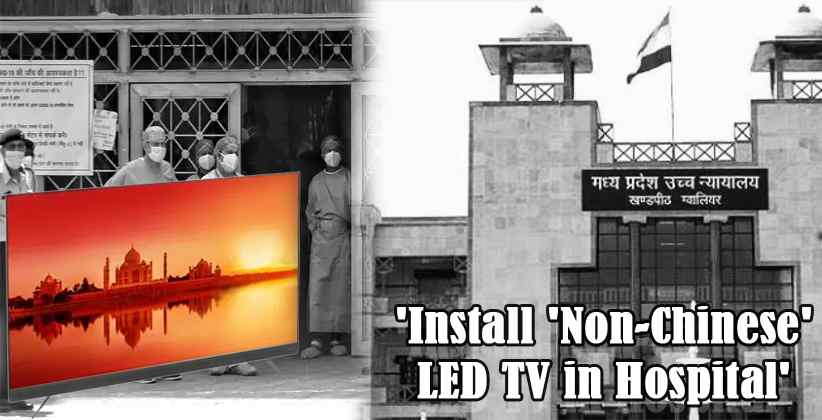 Madhya Pradesh High Court’s Bench of Gwalior has recently permitted a bail condition to two accused in a criminal case. This was allowed on the prerequisite that they put an LED TV screen that was not made in China at the Gwalior District Hospital. This comes after border tensions along the line of actual control (LAC) between China and India.

The directions were given by the one judge bench of Justice Sheel Nagu on June 26, 2020, during a hearing of the different bail applications of the accused in a case of attempted murder which was registered at Badoni police station of the district of Datia in February 2020.

Whilst hearing the separate bail applications of the two accused Mr. Arvind Patel and Mr. Kamlesh, the single judge High Court bench stated in the notification, “Charge-sheet in the matter has been filed on May 18 and therefore, further custodial interrogation of petitioners is not required. Petitioners have no criminal antecedents.”

“In view of above and looking to the special circumstances of the ongoing COVID-19 pandemic and that early conclusion of the trial is a bleak possibility and prolonged pre-trial detention is anathema to the concept of liberty and material placed on record does not disclose the possibility of the petitioner fleeing from justice, this Court is inclined to extend the benefit of bail to the petitioner.”

The court, in the due course of time, also instructed that the petitioner be freed from prison on bail. This was allowed after fulfilling the requirement of providing a personal bond of the amount of Rs 25,000 with one solvent surety of the like amount to the satisfaction of the magistrate that is concerned with the case.

However, the orders were also conditioned to compliance of eight requisites, and the eighth one read, “the petitioners undertake to purchase and install a black colored LED TV at Renbasera, District Hospital Morar (Gwalior) worth at least Rs 25,000, manufactured in India or abroad, except China.”

The High Court furthermore instructed that the Registry will provide a copy of the order for compliance to Legal Aid Officer, SALSA, Gwalior, who shall in turn depute a Para-Legal volunteer to check whether the compliance of condition No. 8 is done by the accused and thereafter provide the Registry with a report within the time of two weeks from the date of the order.

In the previous month of May, the exact one-judge bench of Madhya Pradesh High Court that is situated in Gwalior had given bail to accused in various other criminal cases. Among the conditions for the grant of bail, the high court bench had given the condition that the petitioners have to register themselves with the concerned magistrate of the district as ‘COVID-19 Warrior’. This was done so that they could be assigned all suitable work while taking all prescribed precautions. “This court expects that the petitioner shall rise to the occasion to serve the society in this time of crisis to discharge his fundamental duty of rendering national service,” the bench had stated.

NCDRC: At least one vehicle parking space to be allocated to the homebuyer