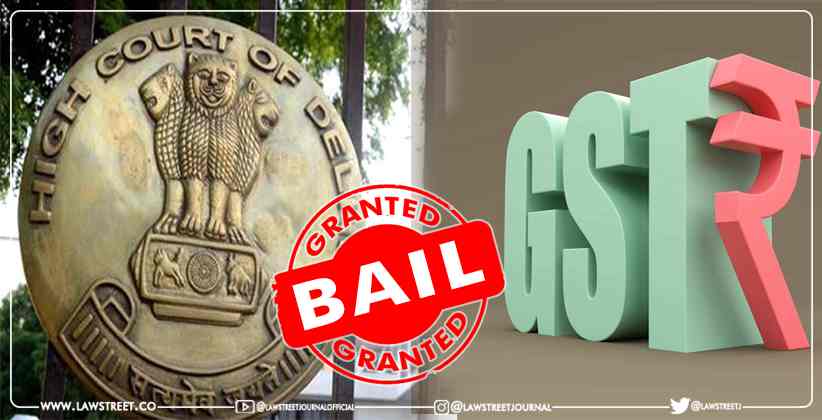 On Sept 30, the Delhi High Court granted bail to accused Krishan Kumar Bansal in a GST evasion dispute that allegedly amounts to ₹ 70 crores. The bail application for accused Krishan Kumar Bansal was argued by Advocate Saurav Aggarwal, briefed by Advocate Ashish Tiwari and Advocate Vibhu Anshuman. The bail application was filed in the investigation carried on by the respondent - The Directorate General of GST Intelligence (DGGI) in a complaint registered under Sections 132(1)(b) & (c) of the Central Goods and Services Tax Act, 2017.

DGGI stated that a complaint has already been filed against the petitioners (Krishan Kumar Bansal and Yogesh Kumar Goyal) before the learned Trial Court with the allegations that M/s. Jetibai Grandsons Services India Pvt. Ltd. (in short JGSIPL) along with various other firms, including M/s. Urja Global Limited (in short Urja) (of which petitioner Yogesh Kumar Goyal is a Director and petitioner Krishan Kumar Bansal is a CFO) are alleged to be involved in fraudulently availing and passing on ineligible/ fake Input Tax Credit (ITC).

It is alleged that in a short span of 5 months, i.e., from November 2020 to March 2021 M/s. Urja has availed and fraudulently passed on ineligible ITC amounting to ₹17.2 crores to M/s. JGSIPL with no inward supplier in place.

The petitioners raised various issues in relation to the present investigation/inquiry being carried out by the respondents as also the complaint filed. They contended that hurriedly on the 60th day at 7.00 PM after the Court hours were over so as to frustrate the right of the petitioners to get bail under Section 167(2) Cr.P.C., an incomplete complaint was filed before the Duty Magistrate wherein it is clearly noted that further investigation is going on.

It was also contended that the entire evidence in the matter is documentary in nature as has been noted in the panchnamas and that the so-called findings arrived at in the complaint could not have been done without an assessment, and in any case, the claims of the DGGI are highly disputable.

Adv. Saurav Agarwal (representing petitioner Krishan Kumar Bansal) argued that the claim of the respondent that the buyers used Input Tax Credit cannot make the petitioner liable for the reason that the petitioner paid due taxes. He further contended that M/s JGSIPL and M/s Sun Automation Ltd. have taken the benefit of ITC whose Directors have not been arrested and no complaint has been filed against them as yet. Further, the Statement of the petitioner under Section 136 of the GST Act cannot be treated as a confession unless the same is proved in the Court during the trial. Adv. Saurav Aggarwal also stated that all offenses, if any, are compoundable and that too post-assessment and that serious issue arise as to the manner in which the complaint has been filed which can only be decided by the Assessing Officer and not by a Magistrate during the course of trial.

Counsel for the petitioner further stated that the present case cannot be classified as an outright evasion of tax as was the case in the decision rendered by the Allahabad High Court and at best could be a case of re-assessment for which no arrest could be made unless a finding on assessment has been arrived at.

The Court held that petitioners have been in custody now for 70 days, complaint qua them have already been filed by the respondent, and hence their custodial interrogation is not required, and the evidence is documentary in nature. Thus, they can be released on bail.

The Court further demanded both parties to file their written submission (by the petitioners within two weeks and response to the written submissions by the respondent within two weeks thereafter). Bail was granted to the petitioners on their furnishing a personal bond in the sum of ₹1 lakh each with two sureties each of the like amount to the satisfaction of the Trial Court/Duty Magistrate and other applicable conditions.