'Delay In Intimating Insurance Company About Theft Not A Ground To Deny Claim': Supreme Court 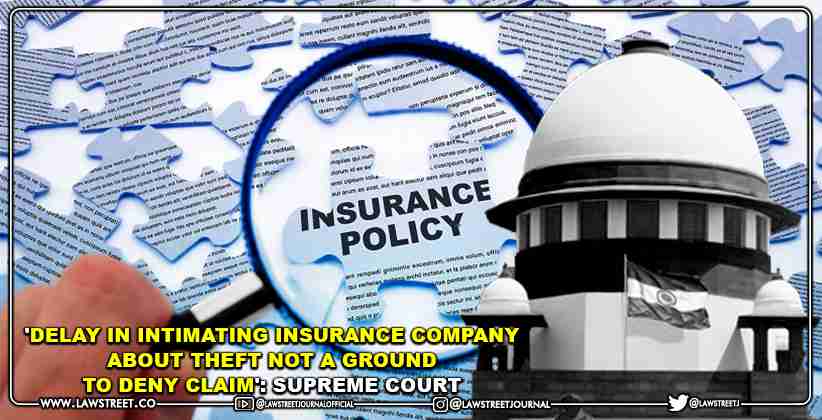 On Sunday 19th of September 2021,Tl the Supreme Court answered the challenge in the present appeal that an order passed by the National Consumer Disputes Redressal Commission [ NCDRC] on 1st July 2015, whereby the Revision Petition filed by the respondent- Insurance Company was allowed and the claim of compensation on account of theft of vehicle was set aside on the ground that the delay of 78 days in not informing the Insurance Company of the theft is fatal.

However, on the intervening night of 24th April 2010, the vehicle was stolen outside the office of a liquor shop, in which the appellant was a partner. An attempt was made to trace the vehicle but an FIR was lodged on 1st May 2010 i.e. after 7 days of the incident.

According to the complainant Dharamender, he informed the Insurance Company about the theft of vehicle on phone, but the written complaint was made on 12th July 2010. It may be noted that the police had filed untraced report of the vehicle, which was accepted by the Judicial Magistrate, First Class, Charkhi Dadri, Bhiwani on 14TH May 2011.

The complaint was allowed by the District Consumer Redressal Forum and an award was passed to pay the insured amount, i.e. Rs.3,40,000/- to the complainant with 12% interest. However, the appeal filed by the Insurance Company against the said order was dismissed by the State Consumer Disputes Redressal Commission vide order dated 4TH December 2014.

The NCDRC set aside the order, relying upon the Judgment of this Court in Oriental Insurance Company Ltd. Vs. Parvesh Chander Chadha reported in (2018) 9 SCC 798 and some other orders of the NCDRC.

The three-Judge Bench of this Court in Gurshinder Singh Vs. Shriram General Insurance Company Ltd. & Anr., reported in (2020) 11 SCC 612, inter alia, held that “when an insured has lodged the FIR immediately after the theft of a vehicle occurred and when the police after investigation have lodged a final report after the vehicle was not traced and when the surveyors/investigators appointed by the insurance company have found the claim of the theft to be genuine, then mere delay in intimating the insurance company about the occurrence of the theft cannot be a ground to deny the claim of the insured.” It is the case where the FIR was lodged on the same day the theft had occurred.

The learned counsel AOR Rajesh Kumar Gupta appearing for the Insurance Company has argued that this Court has not approved the repudiation of claim only on the ground of intimation to the Insurance Company, but delay in lodging an FIR is an important step in examining the claim of the appellant, since as per the appellant himself, the report was lodged after 7 days of the incident. Therefore, the claim filed by the complainant was rightly rejected by the NCDRC.

The bench of Justices Hemant Gupta and V. Ramasubramanian noted that the case of Insurance Company throughout was based upon delay in intimation to the Insurance Company. "We have heard the learned counsel for the parties at length and find that the order passed by the NCDRC cannot be sustained. The claim of the appellant was repudiated by the Insurance Company on  the ground that there is delay of 78 days in intimating the vehicle being stolen on the intervening night of 24th- 25th April 2010. It is the said ground which was raised and accepted by the NCDRC. The NCDRC has returned the following finding to set aside the orders passed by the District Forum, as affirmed by the State Commission:- The delay of 78 days was not explained, " it said.

"The complainant has failed to make a case that there was delay in intimation due to unavoidable circumstances as per the IRDA circular.” However, in respect of the argument that the FIR was delayed, the said arguments need not be examined in this case as the case of Insurance Company throughout was based upon delay in intimation to the Insurance Company. In view of the said fact, we find that the order of the NCDRC cannot be sustained in law. The present appeal is allowed and the order passed by the District Forum, as affirmed by the State Commission, is restored. The amount of compensation as awarded by the District Forum and affirmed by the State Commission be paid to the appellant within two months," the court further remarked.