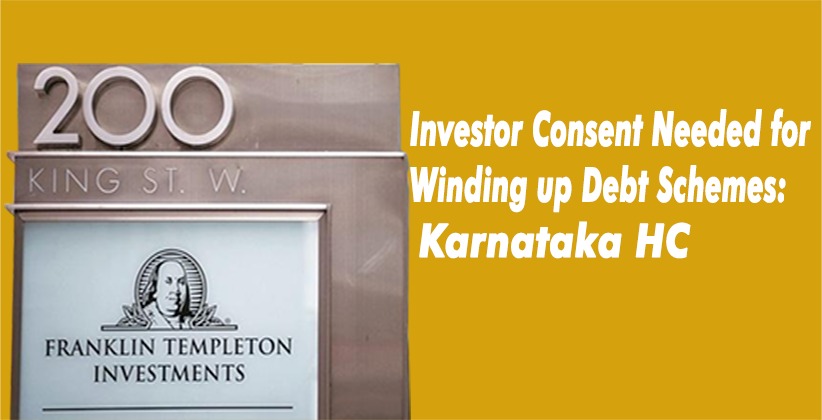 Today i.e. 24th October 2020, the High Court of Karnataka restrained Franklin Templeton (FT) India's decision from winding up its six debt schemes without obtaining the consent of unitholders. This is said to be a major victory for all the investors.

The order from the court was in replyto the petitions which challenged the winding-up of six debt fund schemes of FT. The bench consisted of 2 judges: Chief Justice A S Oka and Justice Justice Ashok S Kinagi. In their order, they directed that trustees should not take any action on the winding up of the six schemes until the simple majority consent of unit holders is obtained.

This division bench gave a 330-page order which stated as follows, “We hold that no interference is called for in the decision of trustees to winding up of the said schemes. We hold and declare that the decision of the trustees to winding up the six schemes cannot be implemented until consent from the unitholders is obtained in accordance with Sub Clause C of Regulation 15. Hence, we restrain the trustees to take any further steps based on the notice 23 April 2020 and 28 May 2020, issued until the consent of the unitholders is obtained. It will open for trustees to obtain the consent of unitholders and to take further steps."

A more active role should be played by SEBI in the matter and it had failed in its duty towards taking prompt actions according to the observations made by the Court. The Court also added that the forensic audit report in the case is tentative and it did not include the final findings.

The operation of the order has been stayed for six weeks to give time to FT India to appeal the order, the Karnataka High Court ruled, directing that status quo on refund and redemptions should be maintained till then.

The asset management company and trustees were restricted from taking any fresh borrowings in the six debt schemes, which were shut in the month of April. In April, Franklin Templeton had decided to shut down its suite of six debt schemes, affecting 3, 00,000 investors unfavorably and assets under management of Rs 26,000 crore. This step was taken in the middle of severe redemption pressure and illiquidity.

This was followed by the Gujarat high court stayed a scheduled e-voting on 3rd June and on 8 June, they rejected the petition stating Franklin to vacate it.

SEBI and FT approached the Supreme Court to lift the stay and it was decided on 19th June by the apex court to transfer all the cases to the Karnataka high court. Due to this, the scheduled e-voting to begin on 9 June got deferred.

The Karnataka High Court clarified that the consent of unitholders as per the regulations is to be obtained before going through the winding-up process.