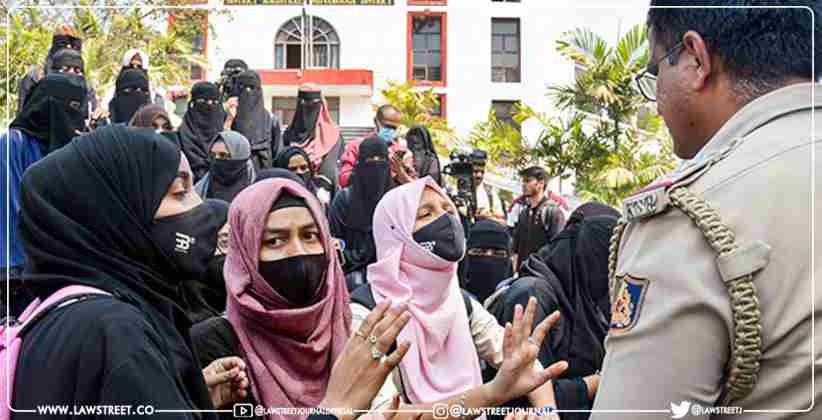 Islamic clerics organization "Samastha Kerala Jem-iyyathul Ulama" has filed a special leave petition in the Supreme Court against the Karnataka High Court's judgment which upheld the ban on hijab in classrooms after holding that the wearing of headscarves by Muslim women was not an essential religious practice of Islam.

The organization contends that the High Court's judgment is based on an erroneous interpretation of the Holy Quran and the Hadis and a wrong understanding of the Islamic law.

The petitioner refers to Surah 24 Ayat 31, Surah 33 Ayat 59 to state that the Holy Quran speaks of mandatory requirement for women to cover their head and neck

"It is respectfully submitted that covering head and neck of woman in the presence of male outside her immediate family is the express dictum of Qur'anic verses and includes in teachings of Muhammed, the Messenger of God and supreme leader of Muslim community. Muslim women across the globe follow this practice in obedience of Qur'anic dictum and teachings of Muhammed ever since the period of Muhammed. Different types of veil are used by Muslim women at different point of time and in different parts of the world to cover their head and neck apart from other garments to cover their body. Hijab is one such veil devised in modern period and it has got widespread acceptance by virtue of its comfort and modesty. It is not the hijab but the purpose behind it, i.e. properly covering head and neck, which is essential part of Islamic tenets", the petition filed through Advocate Zulfikar Ali states.

The petitioner organization, which consists of Sunni scholars, says that though the application of the judgment is confined to Karnataka, the legal proposition stated there have larger consequence all over the country.  The petitioner says that it is the largest Muslim organization in South India and that it is filing the special leave petition in the larger interests of the Muslim community.

It is argued that the High Court erred in holding hijab to be a non-mandatory practice on the reasoning that no penalty is prescribed for not following it.

"As per the law settled by the Supreme Court in catena of Judgments, for a religious practice to pass the 'essentiality test,' it is not necessary that there must be a penalty or penance attached with it. When the Quran, the supreme source of law for Muslims, expressly asks the women to wear the headscarf in such a manner that its edges goes up to their bosom, the High Court is not justified in insisting for a punishment attached with it to get protection of Article 25 for this dress code", the petitioner says.

It is also highlighted that violation of the express commandments of Quran is forbidden and hence hijab is a mandatory practices.

"The analysis of above mentioned Qur'anic verses and Hadis would show that it is a farz (the commandments of Quran) for women to cover their head and neck and exposing the female body otherwise is forbidden. According to Islamic jurisprudence violation of farz is haram (Forbidden). Hence compelling Muslim girl/woman to avoid her headgear is violation of her right to follow the essential practice of her religion as protected under Article 25 of the Constitution"

The petitioner further contends that the High Court relied on the commentaries given by Abdulla Yusuf Ali in the footnotes of suras to conclude that hijab is a non-essential practice.

"Footnotes of Yusuf Ali are only his personal opinion about the concerned Qur'anic verses and its historical background. This opinion cannot be considered as a source of Islamic law much less it could have been given higher credential than hadis", the plea says. It is submitted that the High Court has erroneously taken two verses out of their context and put together to hold that wearing hijab is not mandatory in Islamic faith.

Clarifying that the petitioner does not want Muslim girls to defy the uniform rule, it is said that they only seek a reasonable accommodation to allow the wearing of the headscarf of the same colour of the prescribed dress code. The petitioner also says that enforcing absolute uniformity for citizens "would be seen as a replica of firece Nazi ideology".

"Wearing a hijab or similar headscarf of same colour of uniform dress by Muslim girl would not offend the 'public order' that is sought to be achieved through prescribing uniform in educational institutions. Compelling them to remove this headscarf also, insisting all students to wear same style of dress in classrooms and prescribing such a strict uniform dress code are anathema to the noble ideas of 'pluralism' and 'inclusiveness'. State action prescribing such uniform dress pattern for entire student community not only fails the test of 'reasonable restriction' laid down by this Hon'ble Court but also affronts the cherished idea of 'unity in diversity', which this nation has so far been proud of. It is the respectful submission of petitioner that such an absolute uniformity for citizens would not be inconsonance with the values of Indian Constitution but would be seen as a replica of fierce Nazi ideology", the plea says.

Last week, the Chief Justice of India had declined a request for urgent listing of the pleas challenging the hijab case verdict. "Exams have nothing to do with this issue", CJI Ramana had told Senior Advocate Devadutt Kamat, who had made the mentioning on behalf of a Muslim student for urgent listing by saying that exams are starting from March 28.