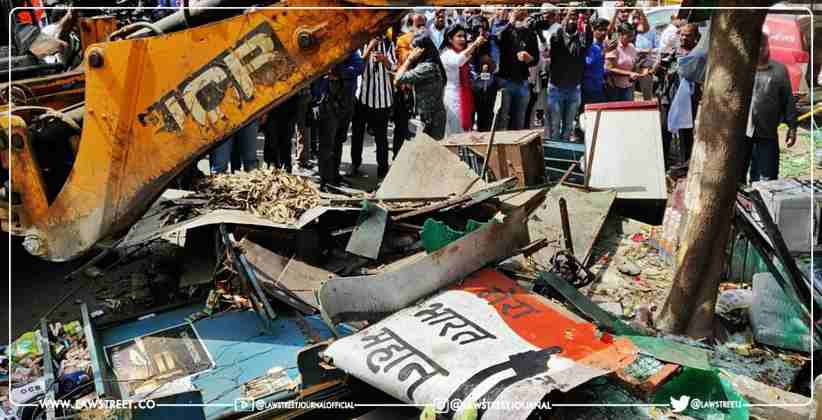 Supreme Court bench led by Justice LN Rao allows Senior Adv PV Surendranath to make submissions on the petition of BrindaKarat when the petitions filed by Jamiat Ulama-I-Hind are taken up.

Bench said it is yet to receive the files of Karat's case.

Sr Adv Surendranath: this is regarding the demolition

Justice LN Rao: submit when the matter is taken up

SC: What is national importance in this matter its about an area

Dave: This was not done in 2002 then why now. Delhi has an act. particular section of society is being targeted. this is the warning constitutional framers gave us. they spoke about this eventuality.

SG Mehta: let him argue on facts and i have reply to the same

Dave: Delhi police registered a FIR against VHP and even before inquiry large scale arrests had taken place.

Dave: they knew we will mention at 10.30 am and that is why demolition began at 9 am . they continued even after the status quo order was passed. this affects rule of law and there will be no democracy left.

Dave: how can BJP leader write a letter that you demolish and NDMC demolishes it. Delhi act has provision for notice and there is provision for appeals too. Look at the Olga Tellis case also and how SC protected the rights

Dave: Please see the preamble of the Delhi Municipality Act, where it is noted how there has been immense migration to Delhi and how changes have occurred beyond the Delhi Master plan

Dave: please see the definition of encroachment as per section 2(c)

Dave: all homes in Jahangirpuri are more than 30 years old and shops are 50 years old. we are in a democracy and how can this be allowed in this country

SC: What you read now is about regularisation. come on encroachment now.

SC: Which is the provision in the act which provides for notice?

Dave: Please see section 343. MCD Act. even otherwise it is been held by this court that right to life includes right to shelter.

Dave: this is inconceivable in the democracy and this is what we are against, the law of the Jungle !

Dave: we have a right to first make correction in the record and then it says that no demolition will take place unless the person has been given a reasonable opportunity

Dave: these are poor people. If you want to remove encroachments come to sainik farms. Come to golf links where I stay and every second home is an encroachment somehwere, but you dont touch it at all

Dave: police and civil authorities are bound by the Constitution and not by letters written by a BJP leader. this is a sad scenario.

Dave: the leader wrote that some anti social elements pelted stones on the shobha yatra and that they have support from AAP leaders and that he wishes that homes of such people be bulldozed

Dave: they started demolition at 9 am when they knew we will mention. they went on demolishing even after status quo orders

Sr Adv Kapil Sibal: encroachments is a serious problem all over India but the issue is Muslims are being associated with encroachments

Sibal: My plea is that such instances are happening in other states also. when processions are carried out and frictions occur, homes of only one community is bulldozed and politics in power judges what happens or not happens

Sibal: Look at Madhya pradesh where minister says that if muslims does such a thing they cannot expect justice. who decides that ? who gave him that power. somebody is in jail his house was demolished, somebody who raped their house also broken down

Sibal: in Delhi also the community at certain areas was gated and locked up. what do they want? to instill fear or do away with them?

Sibal: encroachments is not limited to A community and B Community, you cannot demolish their houses and say that they encroached. it is not a forum for politics and this forum is to show that rule of law prevails.

Sibal: i want stay on demolition

SC: We are not staying demolitions in this country

Sibal: i mean this area in particular

SC: we will see

Sibal: not with bulldozer

SC: Demolitions are always with bulldozer

Sr Adv PV Surendranath: I had communicated the order to Brinda Karat at 10.45

SC: Not to the authorities

Surendranath: She informed the authorities. They did not stop and it went on till 12.45. she had to physically stand to stop the process