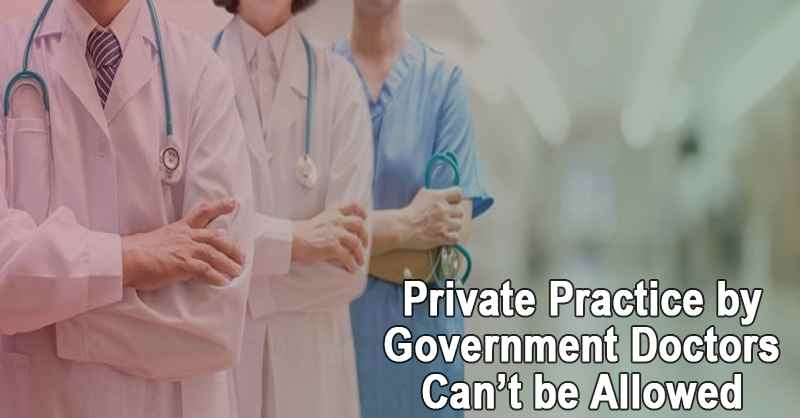 The Jammu and Kashmir High Court observed in the case of Azra Ismail v. Union of India that during the pandemic, when the country was experiencing lockdown and when all the government hospitals in the country closed the health facilities due to increasing cases of COVID-19 some of the medical practitioners were practicing in their private clinics, taking the advantage of the restrictions imposed by the government, since many of the government health facilities in were closed, in J&K they are allowed to work privately.

The J&K HC on 1st September 2020 said that government doctors cannot be permitted to use their employment for private practice and commercial exploitation. The court opined that “This application seeks to highlight an unfortunate fall out and aspects of the practice prevalent in the Union Territory of Jammu and Kashmir whereby Government Doctors are permitted to carry on with their private practice. Learned counsel for the applicant submits that this permission is used by medical practitioners to build large private practices by diverting patients from Government Hospitals to their private clinics”.

The petitioner argued that it is unfortunate in the Union Territory of Jammu and Kashmir that government doctors are allowed to practice privately; this has an adverse effect on society. The applicant said that “facilities in the dental hospital are closed and no procedures are being performed, several doctors and practitioners employed in the hospital are carrying out all those procedures in their private clinics”.

The court said that if applicant arguments are true, then the permissibility of permitting private practices by a government doctor should be re-examined as it promotes commercial exploitation. The order said “It cannot be denied that it is patient care and the public interest which has to be placed on the highest pedestal and optimized Government doctors and professionals cannot be permitted to use their employment and public facilities for building private practices and commercial exploitation. Attending to lucrative private practices has to be resultantly diminished and detract from the attention which a professional would pay to his salaried public position as a government doctor”.

The court further added “Judicial notice can be taken of the fact that employment opportunities in the Union Territory of Jammu and Kashmir are by far, extremely few, large numbers of people without financial resources and health facilities either not available or insufficient. Such practices as complained by the applicants need to be urgently brought to halt.