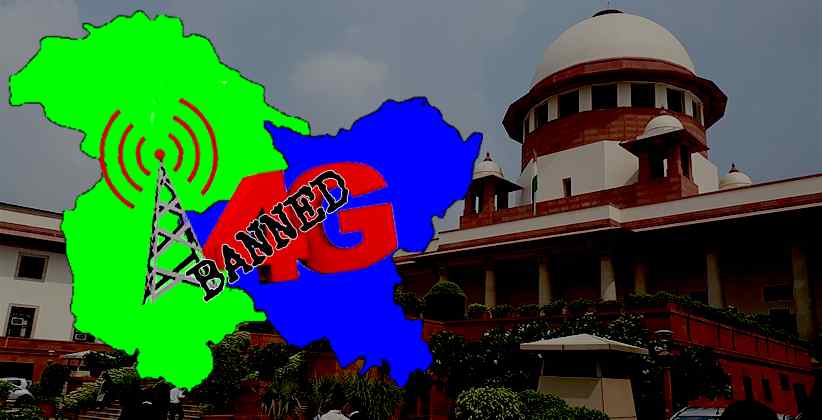 On Thursday, 16 July 2020 the SC granted one week time to the center and UT of J & K to file their reply in a contempt plea alleging non-compliance of the May 11 judgment of SC which directed that a ‘Special Committee’ should be ‘immediately’ formed to determine the necessity of continued restrictions of mobile internet speeds in J&K to 2G only.

Tushar Mehta, Solicitor General adjourned the matter stating that a committee has already been formed.

Senior Advocate Huzefa Ahmadi represented petitioner and stated that the respondents were in “blatant defiance” and did not follow the order of the Top court for non-compliance and that petitioner has made several representations of the order of the top court, but there was no response. He pressed issuance of notice in account of prima facie contempt.

“In the meanwhile, people of J&K suffer.... on May 16 we made a representation to them, asking them what they did in terms of SC’s orders, as they passed suspension orders. We got no response. A second letter was written on May 26, with no response again. How do I know if they have taken into account my representations if they do not publish the orders or place it in the public domain? This is in blatant defiance of the SC orders.”

Attorney General KK Venugopal refused the arguments by Ahmadi. He said, “There is no question of Contempt”.

He further stated that the decision was taken by the Special Committee and there was no contempt on their part. And same has already been placed before the bench in a sealed cover.

Venugopal said: “Please consider it and see if we have complied. There is no question of contempt. Please see and post the matter after two months.”

Justice Ramana enquired why the decision taken by the special committee was not in “Public Domain”.

Ahmadi said: “Contempt is clear because they did not publish orders. They did not put it in the public domain. The top court passed the order in Anuradha Bhasin in January.”

On 11th May, the Top Court had ordered:

SC observed “We are of the view that since the issues involved affect the state and the nation, the Review Committee which consists of only State-level officers, may not be in a position to satisfactorily address all the issues raised. We, therefore, find it appropriate to constitute a Special Committee comprising of the following Secretaries at National, as well as State, level to look into the prevailing circumstances and immediately determine the necessity of the continuation of the restrictions in the Union Territory of Jammu and Kashmir.

The plea stated that even after this the restrictions in J & K were restricted.

This accordingly amounts to ‘willful disobedience’ of the SC.

The contempt petition filed on 9th June will be listed tomorrow.

After the SC verdict of 11th May, J&K extended internet curbs thrice- on 27th May 17th June, and 8th July citing the threat of cross-border terrorism. The administration claimed that 2G internet speed has not caused any impediment during the times of COVID-19.

FMP has also filed an application for immediate restoration of 4G services stating that the denial of the same has caused disruption in medical services, online education, and e-commerce activities.

The Central Government had earlier completely blocked the communication services in J&K in August 2019 right after the abrogation of Article 370. Five months later in January 2020 by the order of the SC, the services resumed partially, only at 2G speed for mobile users. Access was provided only to ‘white-listed’ sites and social media was completely blocked.

The SC further observed that indefinite suspension of the internet is not permissible and has to follow the principles of proportionality under Article 19(2).

The blockade on social media was raised on 4th March, but the speed was retained as 2G for mobile data.