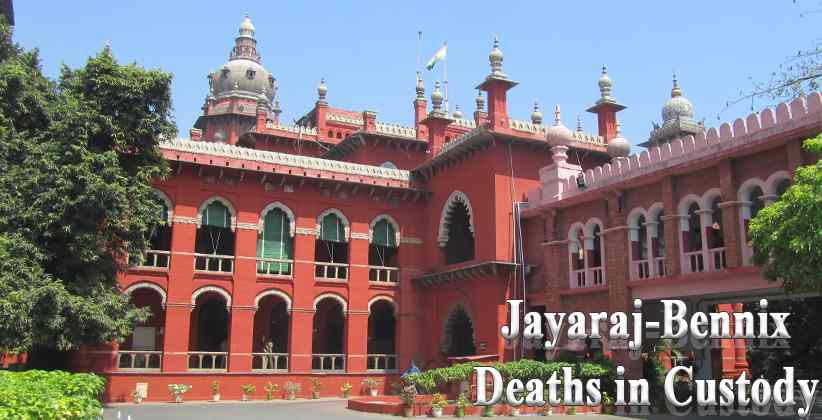 The action against the Court was based on the Judicial Magistrate's investigation, Kovilpatti against Thoothukudi ASP D Kumar, DSP C Prathapan, and Police Constable Mahajan.

A bench comprising Justices P N Prakash and B Pugalendhi observed "District Police administration are doing everything within their command to prevent the learned Magistrate from proceedings with the inquiry".

"The report shows that Mr. D Kumar, Additional Superintendent of Police, Tuticorin and Mr. C Prathapan, Deputy Superintendent of Police, Tuticorin made themselves available in the Sathankulam police station and in their very presence, the other policemen were taking videos of the Magisterial proceedings. The policemen were not giving the records called for by the learned Magistrate and it is seen that one of them, viz, Mahajan, Police Constable, Sathankulam Police Station, had made a very disparaging remark in Tamil to the learned Magistrate", the bench observed.

The Court said the Magistrate's report was adequate to recognize Criminal Contempt under Section 15(1) read against the said officers under Section 2(c) of the Contempt of Courts Act, 1971.

It may be noted that the Magistrate is conducting the inquiry as ordered by the High Court on 26th June 2020, in a suo moto case taken regarding the deaths of the custodian.

The HC also noted that a free and fair investigation is not possible without the transfer of the said officers and the Sathankulam police station staff.

The next day at 10.30 am the appointed officers were asked to appear in person before the court.

The matter concerns the father-son duo Jeyaraj and Bennix 's custodial deaths on June 22nd/23rd June 2020, after being arrested for allegedly keeping their shop open in breach of the guidelines for lockdown.

The accounts they got of their horrific torture also caused a country-wide outcry at the police.

The HC also ordered the District Collector on Monday, 29th June 2020, to depute income officials to protect the case-related materials after the Magistrate alleged that the police had not cooperated.

This recent custodial death of the father and son who ran a cell-phone shop in Tuticorin has outraged public opinion and many celebrities have raised their voices against police violence.

The shockwaves created by the incident have transcended the borders of Tamil Nadu, unlike in several earlier incidents, and traveled across the country and outside, thanks mainly to a very descriptive video in English posted by Singer Suchitra.

Just as they did for various causes earlier, such as the pro-Jallikattu agitation, the ‘Save the Fishermen’ protest, and the Pollachi Rape Case, many K’town celebrities have protested the death of the father-son duo, Jayaraj, and Bennicks Fenix.